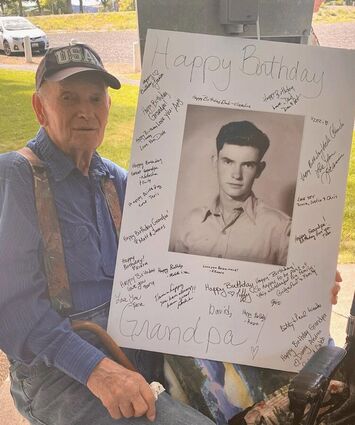 He was born Saturday, July 10, 1927, in Denver, Colorado to Loren L and Florence R. Gates. Claude served his country with the United States Army Air Corp from October 12, 1945 to December 28, 1947. He was stationed in Japan as part of the post-World War II occupation force as an MP (Military Police). One day while on guard duty, 18 year old Private Claude E. Gates refused entry to an officer who did not have the proper clearance information to be admitted to the base. The officer he denied entrance to was - "1st Supreme Commander for the Allied Powers, General Douglas MacArthur!" General MacArthur was impressed and had Private Gates transferred to his personal security detail. The Gates family has a photo of Claude sitting in General MacArthur's lounge chair on board the general's private plane, which Claude was tasked with guarding at the time.

Claude worked for the City of Ephrata for 35 years, retiring as the Supervisor of the Water and Sewer Department and was a member of the volunteer fire department "District 13" for 40 years. For the last 16 years, Claude lived in Coulee Dam, Washington where he loved the local fishing- "his smoked fish are fondly remembered by friends and family". Claude enjoyed the out-of-doors, walking, bicycling, hill climbing and hunting, of which he was an avid Archer for 60 years.

Claude is preceded in death by his first wife: Mabel M. Gates on August 23, 1982 and siblings:

Fond memories and expressions of sympathy may be shared at http://www.stratefuneral.com for Claude's family.