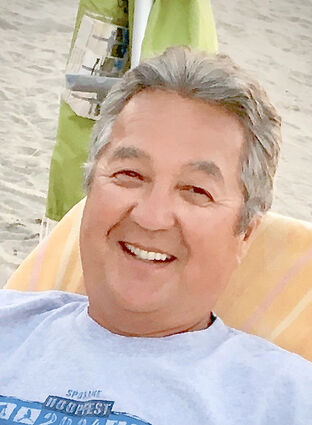 William Merle Desautel Jr. was born on December 8, 1953, in Battle Creek, MI to William (Merle) and Matsue (Peggy) Desautel. On Sunday, July 3, 2022 he succumbed to his courageous battle with Non-Hodgkin's Lymphoma at Sacred Heart Medical Center in Spokane, Washington.

On July 1, 1978, he married Carla Scallan in Coulee Dam, Washington. In the early years, they enjoyed playing organized community sports, participating in racquetball tournaments, camping, and many other outdoor activities with family and friends.

The true love of his and Carla's lives are their children, Brea and Drew. Their dad, along with friends, lovingly coached them through various sports when they were young. He enjoyed working on and cleaning their cars for them before sending them back on the road.

Time at the beach with family and friends was a treasured hobby for the entirety of his married life and was a cherished family activity. It was important to him that his children knew love and respect for nature, as they grew from infants to adults, raised on the shores of the lake. Pine was rarely considered a stranger, as his quick wit and sunny disposition were entertaining and enticing to all he encountered. He enjoyed cultivating many new friendships over the years on Lake Roosevelt, making friends wherever he went.

Pine retired in 2016 after working at the Bureau of Indian Affairs for 22 years in the Roads Department in Road Design and Construction, and later working at the Bureau of Reclamation for 20 years as a Hydro-Mechanic. He often said how lucky he was to have had two fulfilling careers that he loved and countless coworkers that he admired and cherished. His humor, kindness, diligence to detail, and ever-present smile made him not only an exemplary employee, but a deeply loved coworker and friend. He was extraordinarily proud of his 42 years of service and the relationships he made along the way.

After retiring, he did exactly what he wanted to do; he relaxed at home, played golf, puttered about, organizing his garage, and spent as much time as possible at the beach with family and friends. He was a loving, dedicated, kindhearted, fun husband and father who was completely devoted to his family. He loved pranks, card tricks, the Dallas Cowboys, and was a captivating entertainer and storyteller.

In recent years, he reconnected with his fellow alumni from North Central High School in Spokane, Washington, and from EWU in Cheney, Washington. He was able to catch up with old childhood friends, reminisce, and polish up his former ping pong skills. He looked forward to the yearly gathering of laughing, chatting, and recalling the good ol' days.

Pine is survived by his devoted wife Carla and his loving children Brea and Drew,  as well as his mother Peggy Heyamoto of Spokane, sister Sharlene Andrew and her family of Beaverton, Oregon, his ever present and loving in-law family of mother- in-law, Rosalie Scallan of Coulee Dam, sister and brother-in-laws, Gina and Brett Seaver of Coulee Dam, Shelley and Eric Corbin of Electric City, Washington; nieces and nephews Cole and Alissa Seaver of Coulee Dam, and Shane and Sarah Corbin, along with their precious children Kylie and Kasen of Pullman, Washington. He was pre-deceased by his father, William Merle Desautel, Sr., and his brother David Desautel.

A celebration of life is tentatively being planned for Saturday, September 10, 2022, at Spring Canyon Recreation Area. More details concerning the celebration will be announced at a later date. In lieu of flowers, please send well wishes that the Dallas Cowboys will be announced the 2023 Super Bowl Champions.

Pine was a gentle, loving soul who will never be replaced. While our hearts are heavy, we hope that we can all find comfort in the many years and memories we were privileged to share with him, and remember his warm smile, contagious laugh, and his calm, supportive demeanor in times of tribulation. He is deeply missed by so many already. May every clear, blue sky on a summer day allow you to think of him, however you may have known him. Whether by Bill, Billy D, Pine, or even Pineapple, may we find solace in the brightness that he brought to our lives that can never be taken away.