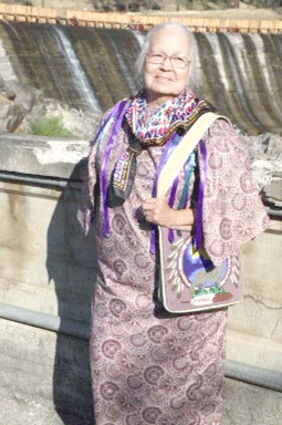 Jeanne spent her early childhood years on the ranch, on Kelly Hill. She loved this place and had fond memories of growing up there and roaming the picturesque hillsides. Later, she and her family moved to Keller where she attend elementary and middle school.

In October of 1961 Jeanne married LeRoy Jerred. Together they made their home in Keller and began raising their family. They had three daughters: Linda McLean, Kelly Jerred, and Deanna Heath. Jeanne embraced motherhood. She supported her children in all their activities: school, sports, rodeo, and 4-H. She worked with the horses just as much if not more as the girls did and loved riding.

Jeanne loved her reservation communities. She was always wiling to volunteer her time to cook for funerals and memorials. She has taught two generations how to prepare traditional foods as well as plan and execute full meals for large services. She is known for certain dishes that people always look for. She was a firm believer in kitchen protocol and thoroughly enjoyed getting to work with the younger generations, serving her people, and helping take care of her community.

Jeanne was a long-time 4-H volunteer. She led many projects, including crafts, sewing and cooking. She taught many Keller youth how to sew and keep records. Many of them can attest to the fact that she encouraged "ripping out" incorrect stitching to re-do and sew the items correctly. Many of her 4-H seamstresses competed at fair and were prize winning 4-Hers.

Jeanne enjoyed basketball and softball. Throughout the 1970's and 80's, she was a team member of the Keller Women's softball league. She was an all-star pitcher for the team and a strong hitter. She helped lead her team through many games and championship tournaments. Jeanne loved watching her daughters, and later in life her grandchildren, play basketball and all other sports. She was the best cheerleader and supporter as she followed all middle and high school games for several different schools. Her voice and cheers could be distinctly heard up and down the courts.

After her daughters were grown, Jeanne successfully ran for and was elected to the Colville Business Council. While serving as an elected official for 8 consecutive terms, she had the opportunity to travel the United States and was able to lobby for many important tribal issues. She testified before and worked with state and national legislatures and pushed for fair treatment for tribes. As she served in office for 16 consecutive years, she maintains the record of being the second longest-serving woman on tribal council. Jeanne has the distinction for being the third woman to ever be elected Colville Tribal Chairwoman.

Jeanne passed away on July 5, 2022. She was preceded in death by her parents Arthur "Archie" and Ruth Arnold, Sisters Margaret "Midge" Palmer and Mona Kheel, infant son, Leon D. Jerred, grandson Gene Jerred, and numerous other relatives and friends.

Jeanne was a respected Elder in her family as well as the reservation community. She is well known throughout Indian Country for her willingness to speak out on important issues. She had high standards for herself. She maintained her dignity and decorum no matter what was happening around her. She was a kind person who would never turn away a person in need. In her 78 years, Jeanne lived a lifetime of happiness, joy, sadness, failures and successes. She believed in taking things one-day-at-a-time and that things will look brighter tomorrow. We are in dark days now, but we can rest easy knowing that Jeanne is with her ancestors, and she is embraced in their loving arms. Jeanne will be missed.

Strate Funeral Home is assisting Jeanne's family. Fond memories and expressions of sympathy may be shared at http://www.stratefuneral.com.