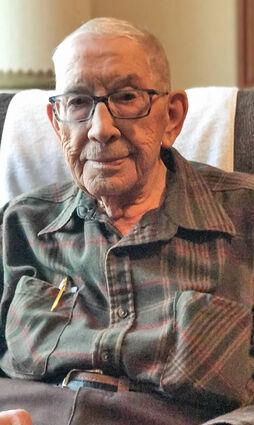 World War II Veteran Fred R. Long, 99, was born near Oroville, Washington on November 6, 1922 to Harry L. and Virgie Lea (Wright) Long. On June 16, 2022 he left his home in Grand Coulee, Washington for Heaven to join his beloved wife of over 70 years Val (Valeta) and his Lord and Savior.

The depression caused Fred's father's shoe repair business to close due to customer's unpaid bills. The family moved and homesteaded near MauriceTown, B. C. Canada in 1930. In 1932 they moved to the Seattle-Renton area.

In the summer of 1940 Fred and two of his older brothers signed up for the National Guard and were inducted into Federal Service on September 16, 1940, supposedly only for one year of training. The draft was instituted during the one year and Fred and brothers did not get out. His mother's request was to get into a Quartermaster unit. His first assignment was as a truck driver at Camp Murry, Washington.

In the summer of 1944 Fred was sent to Hawaii with the 96th Quartermaster Company. In September 1944 he was on a ship bound for Leyte Island, Philippines to participate in the invasion of Leyte Island. In March 1945 they headed for Okinawa. Landing Day was on Easter Sunday, April 1st.

In July 1945 the 96th Infantry Division went to the Mindoro, Philippines to rest up for the invasion of Japan. While in Mindoro they received the news of the dropping of the atomic bomb ending the war. Fred arrived back at Fort Lewis on Christmas Eve and arrived home (in Washington State) on Christmas Day 1945.

He vowed he wasn't going to get married. On New Year's Day 1946, Fred walked into 'Walt's Bakery and Fountain' in Kirkland, Washington and saw the most beautiful young lady he had ever seen. He knew she was to be his wife. They dated and after nine days he asked her to marry him. Her response that she didn't even know him did not deter Fred and on April 2, 1946 they were married.

Fred's career included periods of time working in construction, selling and managing car sales at various car dealers, and managing apartments. Fred and Val celebrated their 70th Anniversary together in 2016.

Fred is survived by a son, David Long (Lois) of Preston, Connecticut; Son-in-law David Ward, grandchild Adrenne Deck (Damien); and great grandchild Sophia Deck, Connecticut. He was proceeded in death by his beloved wife Val in May of 2016 and their daughter, Cathy Ward.

Fred has been laid to rest next to Val at Washington State Veteran's Cemetery in Medical Lake, Washington.

Fond memories and expressions of sympathy may be shared at http://www.stratefuneral.com for Fred's family.