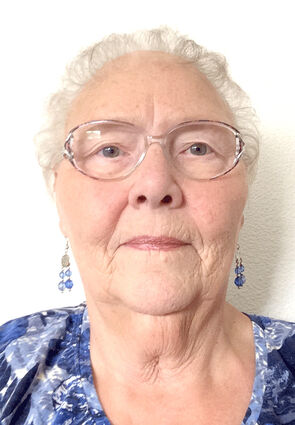 Gwenneth Kay Neal daughter, sister, wife, mother, friend, and servant passed into the Lord’s hands while asleep in her home with immediate family present on Wednesday, May 18, 2022.

She was born in Paris, Arkansas on February 10, 1944. She grew up with 3 sisters, 1 half-sister, and 1 half-brother. Her mother, Alta Engel, was a hairdresser. Her father, Kenneth Day, worked in the shipyards. Alta eventually remarried and they frequently moved throughout the country. Gwenneth’s mother instilled a great work ethic founded on Christian morals, values, and principles. They had a close-knit loving mother-daughter relationship. She had fond memories of activities involving her sisters. She managed to attend 3 different high schools in the Spokane, Washington area. In 1961 she graduated from North Central High School in Spokane, with interests in bookkeeping and accounting.

Shortly after a blind date at a bowling alley, she married her first husband, Geza Elekes, in the fall of 1961 and started a family. Together they raised 3 sons and 1 daughter. As the family expanded, they lived in several places including Pasco, Kennewick, Metaline, Walla Walla, Airway Heights, and Spokane, before settling in the Grand Coulee in 1967, where Geza began worked as a Laborer on the 3rd Powerhouse of Grand Coulee Dam. Along the way they built a small trailer park in the community of Delano. During another adventure, the family spent a summer on a ranch at the end of China Creek Rd adjacent the Columbia River, changing irrigation pipes and bailing and bucking hay.

Her summers were spent with friends and family sisters and all her nieces and nephews, with as many as 25 to 30 sitting at a mealtime event. Other activities included picnics, gardening, canning, camping, and swimming at Spring Canyon. Her favorite flower was always the Yellow Daffodil. One fun activity she looked forward too was bowling. She and a few of her friends served on a women’s league bowling team that used the Coulee Dam bowling facility. She was a member of the American Bowling Congress. Her best bowling score ever was a 254. Occasionally she and her teammate friends made it to the state bowling tournaments in Tacoma Wa. They divorced in 1979.

In 1981 she remarried to her second husband, Mel Neal. On the side, she did the booking for their upholstery business. Her true passion was working at The Star Newspaper. She helped with front counter and bookkeeping. She had high respect for her boss, who valued her work ethic, and she truly loved her work friends at The Star as well as all the people she met throughout her days working at the newspaper. As a side venture, they had a craft business that included quilts, jewelry, handmade items, and stain glass works of art. They attended community craft shows, starting with Colorama in the spring and continuing throughout the summer weekends, working at town and city events across the state.

In 2004 they divorced, and she moved to Moses Lake. She held several bookkeeping jobs, but her favorite was working at Irrigators Inc. Again, she had a wonderful boss who was amazed that her business books always balanced to the penny. She truly enjoyed the people she worked with as well as all the people met. That gave her resolve, strength, and great since of purpose. Between 2004 and 2012 she developed a passion for motorbike riding and enjoyed her “Three Wheeled Chariot.” She was an active member of the United Motorcycle Club International – Othello, Washington. She enjoyed attending the numerous fundraisers and bike rallies throughout the state. During the past decade, she rekindled her Christian faith and attended congregation services in Fall City, Washington, as well as online. Throughout her life she has been one of God’s servants dedicated to helping and serving others with her time, talent, and treasures.

She is survived by 3 sisters, 3 sons, 1 daughter, 6 grandchildren, and 3 great grandchildren. She will be laid to rest at Spring Canyon Cemetery. A private family gathering will be planned for a later date. Donations and memorials in her name, can be sent to: Grand Coulee Seniors, including their Meals on Wheels program.

Strate Funeral Home is assisting Gwenneth’s family. Fond memories and expressions of sympathy may be shared at http://www.stratefuneral.com.