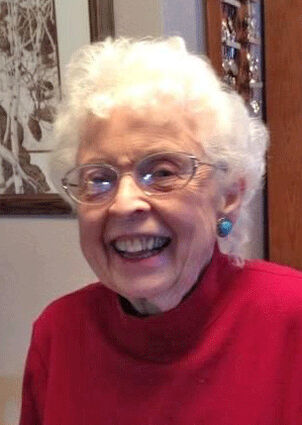 Edith Louise Scott Alling Lael, 97, long time resident of Grand Coulee, Washington, passed away the morning of Monday, May 9, 2022, at Vista Manor Assisted Living in Wilbur, Washington. Born Sunday, February 1, 1925, in Everson, Washington, the only child of Norman and Louisa Scott, Edith began her education riding her horse to the one room schoolhouse near the Sanderson ranch, before moving to Grand Coulee High School and graduating from Lewis & Clark High School in Spokane, Washington.

Edith married Coastguardsman - George A. Alling, September 24, 1944, in Spokane, Washington, and together they raised their family in Rex , Washington, where she was active in Del Rio Grange #828 and loved her animals, such as geese, chickens, ducks, guinea hens, sheep and horses, just to name a few. They then moved to their home in Grand Coulee, where Edith would live the remainder of her days. Following George's death in May of 1984, Edith remained active in the community including the "Grand Coulee Art Club", "Planet Earth Players" (Grand Coulee's local theater group) and "Them Dam Writers" where she was well known for her poetry.

On November 5, 1988, Edith married Grady "Skip" Lael in Davenport, Washington, with whom she shared life until his passing in June of 2007.

Edith enjoyed traveling, quilting, sewing and needlework. Her family remembers Edith with a warm heart and fond memories of the goodies which flowed from her kitchen. "Mom was a wonderful Cook! She made the absolute Best Pie Crusts and Great-Great Fried Chicken!"

Her family asks that any memorial contributions be made in Edith's memory to the Grand Coulee Volunteer Fire Department, 205 Spokane Way, Grand Coulee, WA 99133.

Strate Funeral Home is assisting Edith's family. Fond memories and expressions of sympathy may be shared at http://www.stratefuneral.com.