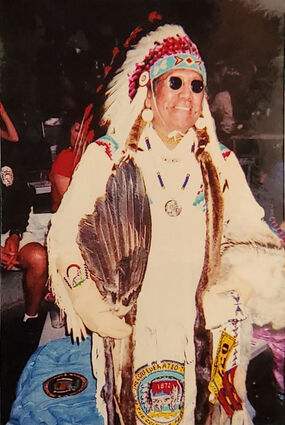 Roger Dean Jack "Weel K^Wen Eet Cha" , 70, proud Elder of the Confederated Tribes of the Colville, left us during the early morning hours of Tuesday, February 15, 2022, from Wenatchee, Washington.

Roger entered this world on Sunday, October 7, 1951 ,in Nespelem, Washington, to the home of Isaac Sr. and Jennie Dora Swawilla-Jack.

A member of the Catholic Church, Roger was passionate about his Native American Heritage. He loved the Traditional Ways, Participated in powwow contests, beading, and delving deeply into his people's history, which he actively shared, instilling those traditions into the hearts of the next generation at every opportunity. An alumnus of and future professor at Eastern Washington State University, Roger also taught at Wenatchee Valley College, St. Mary's Mission and Nespelem School. He enjoyed working with "Young Indian Riders" and tried never to miss a Lake Roosevelt High School Basketball game.

When not working with youth, Roger enjoyed writing, traveling and "Thrift Store Finds," but most of all, he loved spending time around his adopted "grandchildren."

Strate Funeral Home of Grand Coulee, Washington is caring for his family. Fond memories and expressions of sympathy may be shared at http://www.stratefuneral.com for Roger's family.