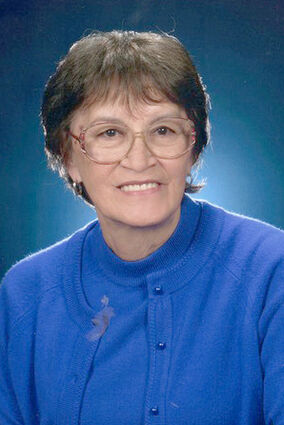 It is with great sadness that we announce the passing of our beloved mother, Frances M. Hocking. She passed away on Wednesday, January 12, 2022, at the age of 79 from Alzheimer's.

Frances was devoted, humorous, strong, and hard working. These characteristics were prevalent throughout her life.

Frances was born on February 14, 1942, in Browning, Montana, to Frank and Ethel Merchant. She was raised on the Blackfeet Reservation and shared a home full of love and laughter with her parents, six sisters and one brother. This is where our mother learned about the power of humor and hard work. Life wasn't always easy in their small home, but they made ends meet and made countless, cherished memories. A room would boom with laughter when the Merchant siblings were together. "Laughter is the best medicine," is what our mother frequently would quote. Her laughter was the sweetest sound and provided comfort to so many throughout her life, especially her children and grandchildren.

Frances was a devoted wife, mother, and grandmother. Our mother had a few jobs throughout her life, but the job she excelled at was being a homemaker and grandmother. She was a woman of few words, but her unconditional love and devotion spoke louder than any words. We were all deeply loved. She found great purpose in caring for others. Our family lived in several different cities in Montana, Idaho, and Washington. Frances resided in Coulee Dam, Washington from 1990-2001. It was during these years that her strength was magnified during our father's long battle with cancer. She was by his side every day and selflessly cared for him before he passed in April 1995. Frances moved to Battle Ground, Washington in 2001 and relished in the joys of being a grandmother. She moved back to her hometown of Browning, Montana in 2019 for two years to spend time with her sisters before returning to the Battle Ground area to live near her children. Throughout, our mother showed the upmost strength as she battled such a heartbreaking and incurable disease. She passed away with family by her side.

Throughout her life, Frances enjoyed gardening, painting, decorating cakes, crocheting, fishing, boating, and camping. She enjoyed physical labor and working with tools. Our mother was small in stature but her strength, determination, and love of hard work surprised many.

A celebration of the life of Frances will be held in Montana during the summer.