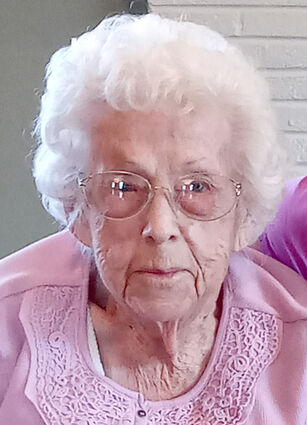 Bertha Ruth Isherwood passed away peacefully on Monday, December 20, at Yakima Memorial Hospital at the age of 99. She was born March 4, 1922, in a sod house in eastern Colorado to parents George and Susan Schreiber. Ruth grew up on a farm. She was a lifelong member of the Methodist Church.

Ruth graduated from Woodrow High School in 1940 and enlisted and served two and a half years in the Women's Army Corps during World War II. She was stationed in several places in the United States and in New Guinea and Manila in the Philippines. She met her future husband in Manila.

Ruth and Art Isherwood were married in Wapato on June 14, 1946. Art worked for the Bureau of Reclamation, so they lived in several different areas including Sunnyside, Yakima, Los Banos, Grand Coulee, Medical Lake and moved back to Yakima in 1990. Ruth loved people and learning all she could about their families. She was an avid fan of Gonzaga basketball.

The family extends their thanks and gratitude to the staff and caregivers at Garden Terrace Adult Home where she lived for nine years and to Apple Creek Family of Homes.

Her husband, two children (Gary and Linda), parents and two siblings preceded her in death. She is survived by several nieces and nephews and their families and sister-in-law Marge Isherwood of Palm Desert, CA.

Ruth's services will be graveside at Terrace Heights Memorial Park with a Celebration of Life at a later date. Memorials may be directed to the Yakima Valley School in Selah or to the Wesley United Methodist Church in Yakima.