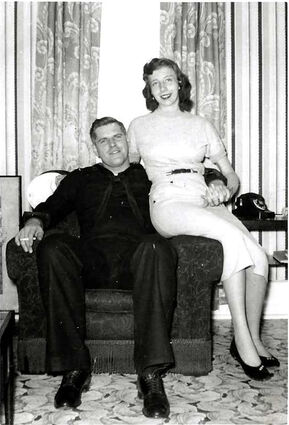 Charles S. Pope, 91, of Electric City, Washington, passed away November 24, 2020 at Brookdale 9 Mile Alzheimer's and Dementia care facility in Spokane Washington. He was born on March 15, 1929 in Offutt, Kentucky to Arthur E. and Eleanor (Butcher) Pope.

Charlie was a 1947 graduate of Mead Memorial High School in Williamsport Kentucky. Following graduation he enlisted in the United States Navy. He was an electrician's mate and served aboard three carriers and two repair ships. Charlie met and married Victoria Nowak while they were both stationed at the Great Lakes Naval Station in 1954. They raised their family in the Long Beach area of Southern California while he continued in the service. Charlie loved the navy, the traveling that came with it and meeting people along the way. After his retirement in 1967, serving 20 years, he became a truck driver hauling merchandise throughout California and Nevada. While living in Apple Valley, Ca. Charlie was involved with citizens patrol a group that interacted with the law enforcement agencies in the area. That was something he was proud to be a part of.

In 1997 Charlie and Victoria left the high desert of California and moved to Electric City, Washington. He enjoyed his retirement years, spent some time in Las Vegas during the winters, fishing out on Banks Lake, cultivating his rosebushes and paw paw trees. He liked his daily conversations with his friend Ron Schrieber and watching Gonzaga basketball and NASCAR. Charlie liked driving so he and Victoria would make day trips exploring Eastern Washington. Charlie enjoyed sitting outside watching the world go by and talking with whoever was on the other side of the fence.  He was a great talker and story teller, loved sharing stories of his growing up years and time in the navy. The last couple of years he had been missing home, his memories were bitter sweet and created a longing for the hills of eastern Kentucky.

Victoria was the youngest of eight children. At the age of 6 her mom passed, and after a couple of years of living with her father and brothers Victoria went to live with her oldest sister and husband who raised her until she joined the service. At eighteen Victoria joined the U.S. Navy and worked at the U.S. Naval Hospital, Great Lakes, Illinois. It was there that she met Charles (Charlie) Pope, three months later they got married on February 2, 1954. In March of 1954 Victoria was honorably discharged and began her life as a navy wife, moving from Illinois to Rhode Island and then finally landing in Long Beach, California. Raising four children kept her plenty busy but she found the time to learn how to drive, which was a must so she could do what was needed while her husband was out to sea.

Victoria loved to dance and her other favorite thing was cheering on her beloved teams from Pittsburgh; Pirates, Steelers and Penguins. While living in Apple Valley, Ca. Victoria enjoyed vegetable gardening, which lead to canning and a few times of entering some items at the county fair earning her some blue ribbons. She liked learning so she took a class about computers and an auto shop course at the community college. She also learned to play the banjo. Victoria was a great cook, her most requested meal was chicken and dumplings and a couple of desserts that just didn't last long in the pan.

In 1997 Victoria and Charlie moved to Electric City, WA and enjoyed their retirement years. They made a trip to North Carolina to visit one of their sons and his family, spent a few winters in Las Vegas meeting up with friends and popping over to southern Ca. to visit family. Victoria tried her hand at gardening for a few years until there was a change in the landscaping. She got hooked on Gonzaga basketball and made it to a couple of Spokane Chiefs games. She loved quiet mornings, a cup of coffee and conversation with the Lord was how she liked starting her day. Victoria was a great conversationalist, had a wonderful sense of humor and a heart of hospitality.