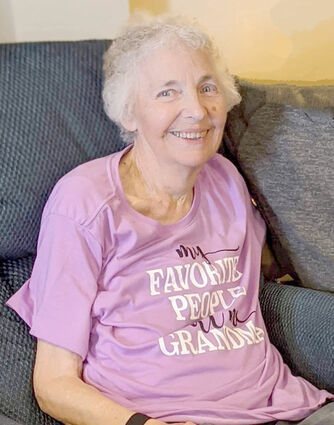 Sally Rice, 77, of Tioga, North Dakota, passed away on Thursday, November 04, 2021, at Tioga Medical Center moving from this world to walk on  streets of gold. Sally was born on February 21, 1944, in Seattle, Washington, to Luther William Miller and Marie (Nymeyer) Miller. She was the second child and the only girl to bless the family. She had an older brother, Gerald (Jerry), and a younger brother, Neil. They all helped their mom with delivering the Spokesman Review and the Wenatchee World newspapers while growing up in the Grand Coulee area.

Sally graduated from Coulee Dam High School (home of the Beavers) in 1962 and moved to Seattle for work. There she met and married Dale 'Craig' Pitner in July 1962. The young couple welcomed 3 children during their time together: James Craig (June 1963), Geri Ann (June 1965) and Chester William Pitner (March 1971). They made their home in Oregon before choosing to separate. Sally then moved back home to Grand Coulee, where she met and married Winton Hill Craig in July 1974. They welcomed another daughter, Salli Jane, to the family (July 1975) and continued living in the Grand Coulee area until ending their union in 1987.

Sally then began a new adventure traveling in an RV with her «Teddy Bear,» Theodore (Ted) Cyril Rice. They made their home wherever their wheels took them, wintering in Arizona and at the gold claim in Montana, and even spending a year in Georgia before buying a home in Coulee Dam, Washington. Sally and Ted married in March of 1999. They loved having family together and their backyard, under the shadow of the enormous blue spruce, holds many fond memories for their grandchildren. Ted passed away in 2005 and Sally spent her next years focusing on her kids and grandkids, as well as volunteering wherever she could. She lived in Georgia and Montana before settling in Tioga, ND in December 2008, the year she came for Christmas and decided to stay.

Sally was active in many organizations throughout her years, including the Grand Coulee Lodge #504 Loyal Order of Moose, the Fraternal Order of the Eagles Aerie 2577 from 1944-2008 (serving as Madame President in 1980), the American Legion Auxiliary Unit #139, the Tioga Senior Center, and the Prairie Garden Club (of which she was a founding member). Sally volunteered for the Foster Grandparent program in Superior, Montana and at Camp Elohim with the Superior Community Church. She enjoyed working with the kids at Tioga Awana Club, as well as with the seniors at TMC Long Term Care. She also volunteered at Lakewood Bible Camp, where she especially promoted their 50 plus camp. Sally was an active member of the TAG (Tioga Assembly of God).

If you had the honor of meeting her, you would remember her hugs (as you most likely got one) and her smile. She was genuinely interested in how you were doing and your life. She was a problem solver and, if she couldn't give you the info you needed right then, you could be sure it was her priority to make sure you did get it. She also loved to share about her kids and grandkids, so you surely know a good bit about all of us, even if we've never met. Sally loved being a grandma and, even more so, a great grandma. She made her grandchildren her priority, making sure to attend all the school and sporting events she possibly could, and crossing the country back and forth for graduations. She prayed for their safety and their salvation (and you know there are no stronger prayers than Grandma's prayers).

Sally was preceded in death by her parents, her son Jim, her older brother Jerry, and her husband Ted.

Sally wished for the family to spread her ashes with Ted's at the ranch in Washington and enjoy a day together at the lake. This is being planned for Summer 2022 and all family is invited to join.

There will be a Celebration of Life held at Tioga Assembly of God November 20, 2021, at 11am with a fellowship meal to follow. Per her request, no dark colors. We are not coming together to mourn, but to celebrate her journey. Bring a smile and a story!