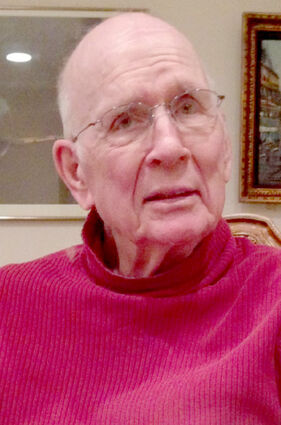 Richard Lee Amenell passed away Monday, November 8, 2021, after a battle with Parkinson's. He was born January 26, 1935, to Verner and Violet Amenell of Mediapolis, Iowa.

Dick grew up on a farm with his parents and three sisters.  He learned a lot on the farm, was active in high school playing basketball and baseball, and was even a school bus driver at age 16.  He went to Iowa State for two years and then joined the United States Air Force becoming a navigator on a KC-135 Stratotanker aircraft that performed in-flight refueling.

While stationed in Lincoln, Nebraska he met Joyce Miller; they were married July 24, 1960.  He served in California during his time in the service along with remote assignments taking him to Spain, Okinawa, and Greenland.

In civilian life, he worked for the Bureau of Reclamation in Nebraska and Washington State. Longing to live in a historic area, they retired to Newport News, Virginia in 1997. He and his wife appreciated the many historical sites there.

They also met their goal of visiting all 50 states. Dick was continually serving others whether he knew the person or not.  For several years he made his famous Brunswick stew for the homeless shelter, was the chaplain for his local VFW, and enjoyed gardening and sharing his produce with family and friends.  They moved back to Washington State, settling in Spokane in 2015.

He is preceded in death by his parents, one brother Eugene, sisters and brothers-in-law, Pauline (Ed) Jarrard, Karen (Sandy) Hedges, Judy Thomas, and granddaughter, Rochelle Amenell.