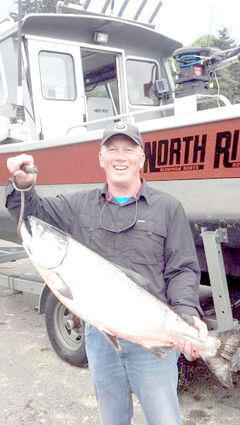 Michael Wayne Wallace "Mike" passed away from breast cancer at home in Kuna, Idaho on Sunday, October 10, 2021, at the age of 70.

Mike was beloved by his family and friends for his grit, warmth, humor, and passion for adventure. Mike was born at Fort Lewis, Washington in 1951. As a young man he loved working with his hands, fixing cars, playing football, any type of water sport, and hunting. His family lived throughout the northwest in Washington, Oregon and northern California. By high school Mike returned to Kelso, Washington and in 1970 graduated from the same school as his father, Kelso High. Mike was the first in his family to pursue higher education. He was awarded a football scholarship to attend Wenatchee Valley College and lead his team to the 1971 Championship. He continued to achieve at University of Washington where he graduated with a Bachelor's in Forestry and a Master's in Fire Science.

Mike started his career in wildland fire as the first Fire Planner for the State of Nebraska. In 1979, he returned to Washington to work for the Bureau of Indian Affairs (BIA) Colville Agency in Nespelem, Washington. Mike spent nine years with the Colville Agency supporting Indian Country, managing wildland fire incidents throughout the west, being mentored and mentoring others. By 1988 Mike joined the Boise Interagency Fire Center (BIFC) in Boise, Idaho as the Chief of Fire Operations for the BIA. While at BIFC, his career continued to grow, managing wildland fire incidents across the US, instructing fire training courses as a subject matter expert, participating in many Interagency Working Teams, and a key member of the Department of Interior Wildland Fire Budget Team. In 2004, Mike transferred to the National Park Service located at (by then named) National Interagency Fire Center (NIFC) in Boise, ID. In 2008, Mike retired from the National Park Service as the National Director of Fire and Aviation with a Superior Service Award. Mike was respected by his peers as a great leader, mentor, and friend.

A memorial to honor Mike's life and legacy will be held at the Wildland Firefighters Monument in Boise, Idaho on November 11, 2021 for family only, followed by a celebration of life open to friends at his home afterwards. For more information and directions contact Randi at 208-890-7841.