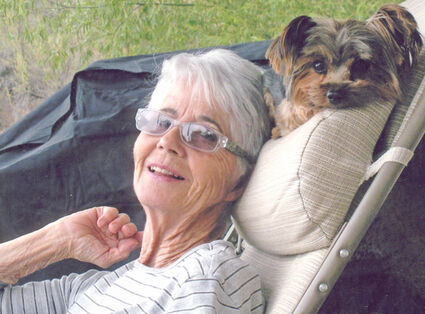 Now reunited with the love of her life, Sharon passed away from a recurring health issue and dementia on October 20, 2021.

Born to John R. and Lois M. Duncan in Omak WA on September 1,1935, Sharon was the youngest of 6 children. She grew up in Nespelem WA and recalled a wonderful childhood.

Sharon never shied away from new experiences or tackling new skills. As a youngster, she gamely followed her future husband Ray D. Nissen in climbing up and jumping off an outhouse. Likely hoping to impress him. She learned to cook from her boss at Davis's a Drug Store/ Soda Fountain in Nespelem, a job she loved. Sharon embraced new challenges and was a lifelong learner.

She grew up with the dream of becoming a secretary and then a mom. Sharon had a scholarship to Washington State College (WSU) but had to drop out after one semester due to lack of money. She did a brief stint at a Spokane business school which led to a job at Lincoln Savings and Loan. While working there, the longtime affection Sharon and Ray shared led to love and the decision to marry. He was in the Air Force, stationed in Ypsilanti MI. He purchased a ring from the PX, sent it to his dad who then gave it to Sharon. Her very first time on an airplane was a flight to Michigan to be married by an Air Force Chaplain. The happy couple settled in enjoying their new life together. After 2 years and pregnant with their first child, they decided to move home to Nespelem. After the birth of their daughter, Sharon and Ray purchased a ranch from Ray's grandparents and set about learning ranching. Sharon's skill set expanded to include helping pull calves, driving tractor, and gardening, all while juggling the needs of their growing (4 kids in 4 years) family. Both took outside jobs at the Grand Coulee Dam when the kids were in school, Sharon as a switchboard operator, Ray as a welder. Sharon later became the head secretary at Nespelem Elementary School. The family was blessed to welcome into their home foster siblings, a girl and boy, making a family of 8. Sharon canned, sewed, and attended the kid's many school and sporting activities. Her energy was limitless.

Lest we've inadvertently painted a picture of a pushover or softie, you must know Sharon had high expectations of her brood. They awoke to long lists of chores and her compassion had limits. "How much blood is there? It's not broken, is it? And "that's not technically a fever," were part of her lexicon. There were schedules to keep.

Sharon loved people and was never too busy to listen and be present when she sensed a need. Sunday school and church attendance planted a seed in her heart. A painful chapter in life led to Sharon's decision to give her heart to Jesus. This was the catalyst for bible studies in the home, and Sharon coming alongside young moms and friends, loving, listening and mentoring them.

In retirement Sharon and Ray helped raise two grandsons and then spent many happy times traveling and golfing together. They renewed their vows at a 50th Anniversary celebration and enjoyed 51 years of marriage. Their last year together was spent mostly at the hospital as Ray battled leukemia. Ever the faithful helpmate, Sharon never left Ray's side. Her prayers were answered when he told her he too had given his heart to Jesus. Sharon found great comfort in this as the love of her life passed in 2006. Though she missed him terribly and endlessly, she reached out to others who were newly widowed and offered her support.

Ever present in Sharon's life was her love of laughter and fun. She found amusement in things large and small. The irony wasn't lost on us that in spite of worsening dementia there were certain cringe worthy stories about us she never forgot and delighted in telling over and over.

Family members were privileged to care for Sharon at her home as her health declined. Like Ray before her, she passed peacefully, with loved ones in attendance. Sharon was preceded in passing by husband Ray D., her parents, in laws, son in law Rap, 2 brothers and 3 sisters. She will be lovingly remembered by her children Kim (Butch) Regina, Joe, Casey (Traci) Karmen, Krystal (Andy), grandchildren, great grandchildren, nieces, nephews and brother Delance.

The family wishes to extend special thanks to grandchildren Misty, Craig, Lily, Casey, Jocelyn, Loryn and Caleb. Their help was invaluable as they loved on their Gram. Thanks too, to special friend Lonna Bussert, she was faithful to the end. Though he can't read, a shout out to Buddy, Sharon's Yorkie, who more than lived up to his name.

A celebration of life for Sharon will be held on Sat., November 6, 2021, at Faith Community Church 16 Grand Ave E. Electric City, Wa. The service will start at 1:00 pm. In lieu of flowers the family suggests a donation to a local food bank.