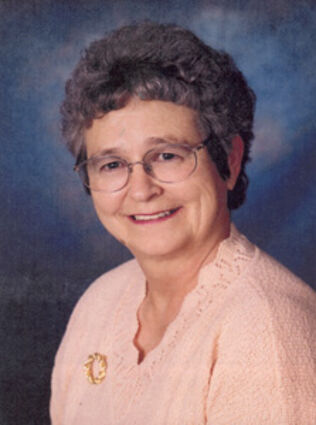 Gail was born on October 19th, 1934, in a cabin on Iron Creek to Mary and Boxer Summerlin. She attended grade school in Keller, Republic, Inchelium and Hunters. Her 7th-grade year was spent in Wenatchee, and then she returned to the area and finished her 8th through 12th-grade years in Wilbur, Washington.

On April 25, 1953, Gail married the love of her life, Henry G. Kuehne. She then graduated high school and began work at the Old National Bank in Spokane. Later, she sailed over the ocean to arrive in Germany where Henry was stationed with the US Army. They traveled around Germany and came home in 1955. When they returned to the United States, their ranching life began for the next 40 plus years. They went on to have four children, daughter, Marilee, and sons, Lawrence, Henry and Percy.

During this time, Gail opened and enjoyed her western store in Keller for several years. She was also an involved community member. Gail was a 4-H Leader, a Ferry County Fair Board member, on the Keller School Board, Conservation District, ESD Board, Ferry County Memorial Hospital Board, and she was the Washington Cattlemen's Association Secretary for many years. She was also a representative for the Washington State Council on Aging and a longtime member of the Colville Indian Livestock Association. She helped organize and held numerous offices throughout the years. She was also appointed to the first Colville Indian Conservation Board and attended the first National Indian Conservation Conference in Las Vegas, Nevada.

After Gail and Henry sold the ranch, their traveling commenced. They visited almost all 50 states. During which, they took many RV trips, visited several European countries and took a cruise. They also enjoyed trail riding closer to home. They, which included the "Dirty Dozen," put on a long weekend rides for many people. As you know Gail, she and Henry made many new friends on their adventures.

One thing Gail really enjoyed was cooking, and she was good at it. She liked to cook something for guests, and then ask if they liked it. Then, she would tell them what they were eating. Some would turn green, while others said, "That was damn good" and had another piece.

In 1964, Gail designed, and she and Henry built the brick house on the lake. During the construction of their new home, Gail, with four small children, would cook a hot lunch with a dessert to bring down to the carpenters and hired boys. This continued when the family moved to their new home. The family of six would grow to ten during the summer months, and Gail enjoyed cooking homemade breakfasts, lunches and dinners for the whole crew all season long.

Gail was a wife for 63 years; she was a mom, a sister, an aunt, a grandmother, and a great-grandmother. She was also a truck driver, ranch hand and parts retriever.

Gail and Henry never met a stranger. Often through their visiting, they would find out they knew a friend of a friend. Gail loved to visit, play cards, dominoes, board games or any other new game to challenge her wits. Her smile twinkled in her eyes, and her laughter was contagious; you could hear it from across any room. Gail will be dearly missed by her community, friends and family.