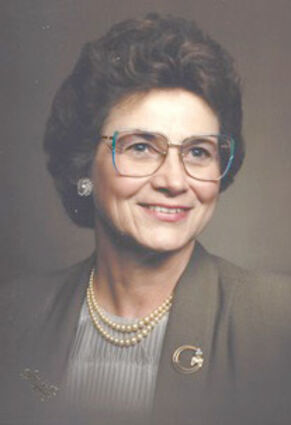 Marjorie Maxine Williams, 91, passed away in Spokane, WA on August 16, 2021, after a short illness. She was born on November 12, 1929, in Pawnee City Nebraska to Glenn and Margaret Packett and was the third eldest of thirteen children.

Maxine graduated from Tecumseh High School in 1947. She married the love of her life and best friend, Kenneth Williams in 1948. They went on to live in Casper, WY, Redding, CA and eventually settled in Coulee Dam, WA where they spent 36 wonderful years before moving to Spokane Valley, WA to be close to their children and grandchildren.

Maxine was dedicated and hardworking throughout her career. She took great pride in her work and held positions as a bookkeeper in Casper WY, a legal secretary for the City of Redding, CA, a secretary for Grand Coulee Dam school district, business manager at Coulee General Hospital, and eventually spent 12 years as the City Clerk of Coulee Dam, WA until she retired in 1989. She was very active in her community and was elected as the first female city council member for the City of Coulee Dam, WA in 1976. She also found a passion for restoring and maintaining the city park, Douglas Park. Maxine was a member of the International Association of Rebekah Assemblies and served as the Grand Marshal of her assembly and was awarded with their highest honor, The Decoration of Chivalry.

During her retirement, Maxine became a business owner and opened the White Cottage Antique Store just a few houses down from her home in Coulee Dam, WA. After closing the business 6 years later, Maxine and Ken spent their retirement traveling and spending winters in Winterhaven, CA.

Maxine loved holidays and family get-togethers; any chance to spend time with her family was important to her. She spent countless hours taking grandchildren to swimming lessons, picking them up from school and giving unconditional love. She enjoyed collecting depression glass, deep sea fishing, boating, sewing, and gardening. Maxine played a significant role in many lives and will be deeply missed. Her selfless compassion and dedication to family will be forever cherished.

A private inurnment and committal will be held at the Veterans Memorial Cemetery in Medical Lake, WA in September 2021.

To share memories of Maxine and leave condolences for the family, visit https://www.pnwcremation.com/obituaries