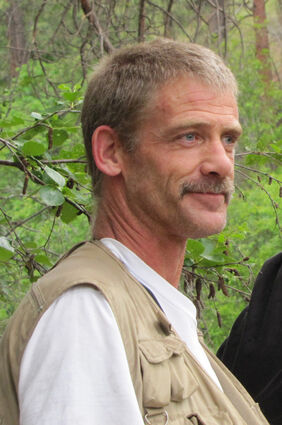 Hunting and camping in the Methow Valley were important activities in Darin's family as he grew up.

Motorcycle riding, snowmobiling, and working on cars with his dad, brother and uncle were special times for him growing up. Darin graduated from Lynnwood High School in 1984. After high school he worked for construction contractors, which taught him many aspects of the building trade. Later, Darin and his brother, began a business, Cougar Concrete, where they built foundations for houses. With his construction experience, he was able to help family, friends, and neighbors with projects and whenever he could.

In 1988, he began his life-long career in the elevator trade, following in the footsteps of his dad and uncles.

Darin was predeceased by his father, Gary Crosby and stepfather, Ken McCallister. He is survived by his wife, Gina, daughter Carrie and her husband, Ben Whitfield, Spokane; his son, Christopher Crosby, Mead; his mother, Jo McCallister, Camano Island; brother, Doug Crosby; and uncle and aunt Gil and Val Crosby, as well as many cousins, nieces, and nephews.

Graveside services will be held Saturday, June 12 at 11 a.m. at Spring Canyon Cemetery in Grand Coulee.