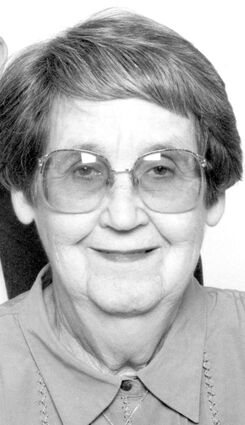 Muriel Lorene Bussell was born in Thayer, Missouri, on July 6, 1926, to Mary and James Shepard. Muriel graduated from high school in Thayer and she attended Southwestern Missouri State University in Springfield, Missouri.

She taught primary education in one-room country schools in southeast Missouri. Muriel married Harold Donald Bussell on December 26, 1948, in Thayer. Following their wedding, they moved to El Paso, Texas, where Harold was stationed in the U.S. Army. In 1950 they relocated to Richland, Washington. Muriel worked as a lab technician on the Hanford Nuclear Reservation. In 1956 they moved to Kennewick where they built their own home. Muriel returned to college, finished her Bachelor of Arts degree, and earned a Master of Arts degree from Walla Walla University, graduating with her MA in 1965. She worked as a teacher for Richland School District and eventually became a school counselor. Muriel retired in 1993. She was a member of the Richland Baptist Church.

Muriel will be interred on Tuesday, January 19th, 2021 at Sunset Memorial Gardens, Richland, WA. Remembrance of life service will be held later when gatherings are permitted.

Strate Funeral Home is coordinating arrangements. Fond memories and expressions of sympathy for Muriel's family may be shared at http://www.stratefuneralhome.com.