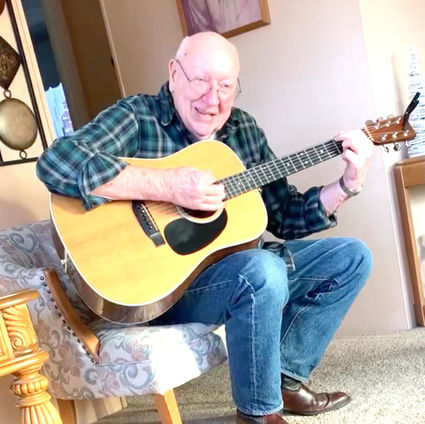 Edward "Peanuts" Haven, 86, passed away peacefully in his home Wednesday, October 7, 2020, with his wife and son by his side.

Peanuts was born May 3, 1934, in his Golden Valley, North Dakota home to parents Ralph and Ellen (McLaughlin) Haven. He was the oldest of his siblings, Harvey Haven, Betty Dennis, and Anita Register.

The Haven family moved to the Coulee Community in 1944 where Peanuts graduated from Grand Coulee High School in 1952.

Peanuts was then soon drafted into the U.S Army and served in the 95th combat as an engineer in Germany.

He met and married the love of his life, Carolyn Bowman, in 1959. They soon began their family - two boys, Ronald Edward Haven and Gary Duane Haven.

After receiving an honorable discharge from the U.S. Army, Peanut used his acquired skills to go into the construction industry.  He made a career choice in which he took great pride, becoming an "Iron Worker", as which Peanut worked on many dams throughout the Northwest. A proud member of Local 14, Ed received his pin of recognition for 60 years of continuous membership, eventually retiring as a rigger from the Bureau of Reclamation in 1994.

In his years of retirement, Peanuts picked up his guitar, traveled, and played in numerous blue grass and country jams.

He was preceded in death by his parents, Ralph and Ellen; oldest son, Ron; and his two sisters, Betty and Anita.

His sense of humor and story telling will forever live on in the memories of all his friends and family.

The family will be holding a Celebration of Life to honor Peanuts in the Spring. We ask that in lieu of flowers, please donate to St. Jude's Children's Research Hospital-National Cancer Institute in Peanut's memory where he contributed annually, on line at https://www.stjude.org/donate/donate-to-st-jude.html?frequency_selected=2≻_icid=mem-lp-donate-bttn-top or by phone (800) 805-5856. "Thank you."