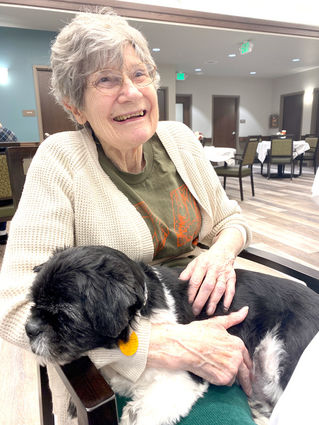 Florence Michaud passed peacefully on September 28, 2020 due to complications from a hip fracture and after a long battle with dementia. She was 86. Florence was born in Port Angeles, Washington on April 29, 1934, to CE "Ernest" and Jessie Davis, joining a sister, Carroll. A true Washington native, she proudly related her paternal grandfather brought the first Holstein cattle to the Skagit Valley in what was then Washington territory. When she was still young, the family moved to Seattle, where she spent the rest of her childhood and young adulthood. She graduated from Ballard High School in 1952 and attended both the University of Washington and Washington State University. She paid for college by working at Boeing and had many colorful stories about the people she worked and commuted with during her time there.

In 1960, she married Jack Michaud and moved to the town of Coulee Dam, Washington.  They raised five children there, and her creativity and resourcefulness made for many happy memories for her family, from handmade candy in heart shaped boxes on Valentine's day to unique, much-loved Christmas gifts.  She was a gifted cook and baker, the Michaud cookie jar was always full, and her homemade cream puffs were legendary. There was always room at Florence's dinner table for drop-in guests, too.

When she was in her forties, she took up running at the encouragement of her sister. She embraced it enthusiastically, hitting the road very early each morning to get her 6-10 daily miles in. Her children joked she would leave them in the dust if they tried to run with her, which was true. She participated in several Bloomsdays and smaller road races around eastern Washington. She ran daily into her sixties, when a fractured pelvis forced her to take up walking.

Florence was a devoted caregiver, first for her children, then her mother and later, her parents-in-law. After her children were grown, she found a new career at Coulee Community Hospital as a dietary aide, putting her exceptional cooking skills to good use.  She also served on the local election board as a poll worker for Okanogan County.

In 1989, she and Jack moved into Spokane.  Never one to sit around, Florence went to work at what was then St. Brendan's Nursing Home as a unit assistant, providing her friendly smile, quick wit and cheerfulness to residents there as she poured water and served meal trays. When the position was eliminated, she turned her focus to volunteering. She was a reading tutor at Jefferson Elementary school under the direction of a "Coulee connection," Carol Smith Hayes, and also processed member mailings at Spokane's public radio station, KPBX.  She was a member of the Glenrose Women's Club.

Florence enjoyed watching amateur sports, and never missed any of her children's athletic events. She regularly attended the State B basketball tournament, always cheering for the underdogs. She was a die-hard Gonzaga University Bulldog basketball fan, mostly because she held Mark Few in such high regard. She loved WSU football until the Leach years and was thrilled when he left for Mississippi State.

Selfless to the end, it was Florence's wish her body be devoted to furthering medical knowledge. As such, it has been donated to the Elson S. Floyd College of Medicine at Washington State University. Once her work is finished there, she will be cremated, and then interred at Spring Canyon Cemetery near Grand Coulee Dam.

She was preceded in death by her husband, Jack in 1997; her parents, her sister Carroll, and her sister-in-law, Patricia Michaud Fairbanks, with whom she enjoyed several trips to Europe.

She is survived by her five children: John Michaud, Seattle, Washington; Mary Beth Aubertin (Joel), Ann Michaud and David Michaud (Lennie Sellers), all of Spokane, Washington; Patricia Michaud, Seattle, Washington and three grandchildren: Gabrielle Holt and Davis Holt, both of Honolulu, Hawaii and Emily Holt, Spokane, Washington. She is also survived by three nieces and three nephews. Florence never knew a stranger and is survived by several lifelong friends. The family is grateful for the loving care she received from the staff at Touchmark Assisted Living and Fieldstone Memory Care in Spokane, Hospice of Spokane, and especially her granddaughter Emily.

At her request, a party celebrating her life will be held at a later date. Memorials may be made to KPBX, your local public radio station, Hospice of Spokane or the Elson S. Floyd College of Medicine at Washington State University. In her honor, please practice Florence's favorite admonishments - "Do unto others, as you would have them do unto you," and "be good, have fun, and do your best."