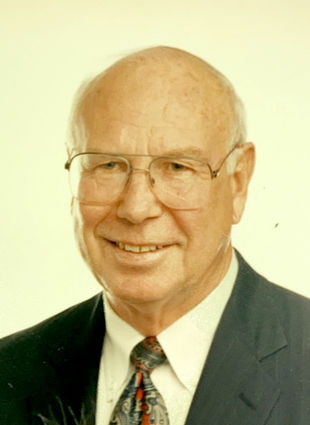 Lester E. Filion, 91, passed away peacefully in his family home of 65 years. His immediate family was by his side and continually with him the last several months of his life.

Lester was born in Gregory, South Dakota, to Lester L. Filion and Laura E. Filion. He was raised in the Grand Coulee Dam area of Eastern Washington from 1935 on, after the family moved from Gregory when his father found employment working as an electrician on the Dam project.

Lester graduated from Grand Coulee High School as the Valedictorian of his class in 1947. He was active in the student government and lettered in four sports (football, baseball, basketball, and track). These were very happy days for him as he developed many friendships which lasted throughout his lifetime.

After High School Graduation, he joined the ROTC and earned his bachelor's degree from Washington State University. He then went on to serve in the US Air Force in Korea for two years and was encouraged by his CO to attend Stanford University where he earned his MBA, graduating at the top of his class. Initially upon graduation he was employed by the Boeing Company managing financing arrangements for various airlines around the world. During this time, he traveled to over 100 foreign cities and ports. Since 1974, he had been an owner/officer of the VIOX Corporation in Seattle. He enjoyed his business career there and worked with some exceptional businessmen, who also became lifelong friends during this time.

His biggest joy was the family he loved, that surrounded him and continued to grow over the years.  Ultimately, his family grew to around 50 members including brothers, brothers-in-law, sisters-in-law, grandchildren, great grandchildren, nieces, nephews, and great nieces and nephews. His family brought him much happiness and many memories.

His love of sports and competition continued through the end of his lifetime. He was an avid Seattle Mariner and Seahawk fan.  He attended many UW Husky football games with his brother Willard (D. 2018) and rarely missed a WSU football game, live, or on the television.

He was a humble, generous, thoughtful, and considerate man with a great sense of humor. He was always interested in what everyone was doing and could be counted on for sage advice if asked. We miss him dearly.

Lester, Virginia, and family were members of Phinney Ridge Lutheran Church for several decades. They were active members that contributed time and resources for the benefit of others.

At his request, there will be a small family gathering for services.

Donations can be made to: