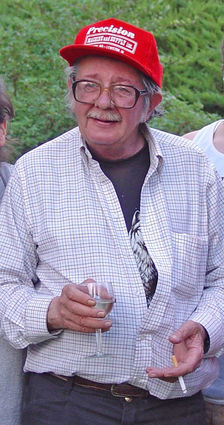 Charles Brian (Charlie) Minter passed away peacefully at his home in Republic, Washington, Sunday, August 16, 2020, at the age of 83.

Charlie was born on September 26, 1936, in Stockton, California, and was the first of seven children raised by parents Robert and Frances E. (Dougherty) Minter. Charlie followed in the footsteps of his father for the love of the outdoors and in the profession of carpentry. He spent many years fishing, hunting and enjoying the woods in the Northwest.

After graduating from Coulee Dam High School in 1955, Charlie joined the US Army in 1957 and served as an Army Photographer through 1959 receiving an honorable discharge.

Returning to the Coulee area he met and married Louella Orr of Omak, Washington, in 1960 and they had two children – Marty and Michelle. Their marriage ended in 1970.

Charlie then worked throughout the Northwest in various carpenter positions. In the 1990's Charlie moved to Hungry Horse, Montana, living there for several years and meeting his last life partner; Susan Foster.

Charlie and Susan returned to the area he loved -settling in Republic, Washington, up until his recent passing.

Charlie loved to fish and hunt, spending many enjoyable outings with his two brothers Robert Jr. and Roland as well as many friends over the years.

Charlie was preceded in death by his parents and a sister; Marilyn (John) Aumick, of Elmer City, Washington, and his companion Susan of Republic, Washington.

Charlie made many close friends while residing in Republic and the Grand Coulee area over many years. The family expresses many thanks to all those who called Charlie a friend and for assisting him in his later years, especially Jim and Virginia Patrick of Republic who took Charlie on many fishing and hunting trips and cared for him in his failing health.

Charlie will be missed by all his family and the many friends he made over the years.

Due to the pandemic, no services are planned at this time but a memorial will be held in the spring when his ashes will be placed near his Mother's grave in the Spring Canyon Cemetery in Grand Coulee. In lieu of flowers, the family suggests making a donation to a local charity of your choice in Charlie's name.

Bergh Funeral Service & Crematory is in care of arrangements.