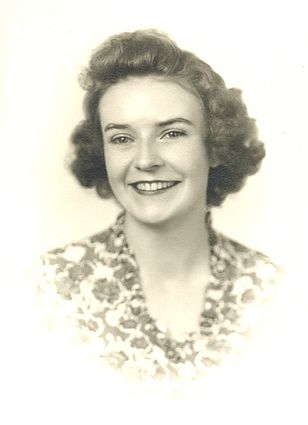 Ann was raised in Denver and graduated from Holy Family High School in 1940. She attended Creighton University in Omaha, Nebraska, where she was a member of the Kappa Zeta Kappa sorority.

In January of 1943 while at Creighton she attended a dance and met a young man, Ray Zowada, from Wyoming sitting across the table. After that chance meeting, they were inseparable and were married on Christmas Day 1943 just before Ray left for the war.

Ann and Ray would spend nearly 70 years together. They relocated to Coulee Dam, Washington in 1950 and remained there until Ray's death in 2013.

They were blessed with four children: Maryann (Mimi), Steve, Mike and Greg.

Ann was a stay at home mom until the kids were raised and then went to work at Vordahl's Variety Store where she loved meeting and talking with new people.

She was very active in local organizations such as PTA, Altar Society and the Hospital Auxiliary. She was a member of St. Benedict's Catholic Church, the Eagles, Moose, taught catechism classes, and was a Cub Scout den mother. She loved to bowl and watch her grandkids' compete in sporting events.

Ann traveled extensively with her good friend, Vicki Sevela. She attended many Van Valkenburg family reunions, first with her brother Fred and later with granddaughter Melissa at various places around the country.

After Ray passed in 2013, she moved to Omak, and resided at Apple Springs Assisted Living where she lived until her death.

A family only graveside service will be held in the near future at Spring Canyon Cemetery in Grand Coulee, Washington.

Zowada family , Ann was such a pretty woman . This was a very nice article about her and Ray. We wish you warm heart felt love in this tuff time of Ann’s passing. Knowing she is happy and surrounded with loving people forever. Times like this always bring back great memories of childhood . And you are all loved so much. Please know we are with you in spirit and sending prays and love ❤️ Tami and Scott Warrington