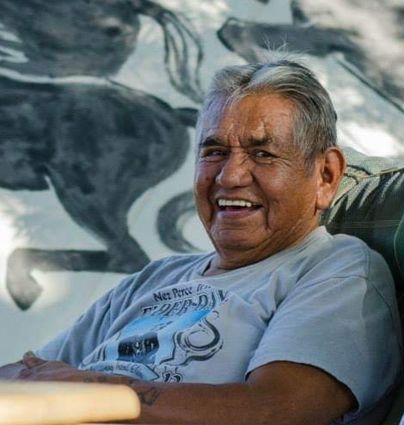 On Thursday April 2, 2020, the sun rose above the Nespelem Valley as Thomas Moses Wolf Head (Wilson) La-pit-he-sham-tusesh (Two Moons) started his journey to be with his ancestors. Thomas aka Bugs was born in Nespelem on June 14, 1950, to (late) Thomas "Wimpy" Wilson Sr. and (late) Catherine P. Francis. He was raised by his late grandmother Sadie Moses Williams at the family home on Owhi Flats until moving to town.

He attended grade school in Nespelem and continued to be a Proud Nespelem Savage through and through, even after the school became Eagles. He graduated from Chiliocco, Oklahoma in 1968.

Bugs was a member of the Confederated Tribes of the Colville Indian Reservation and descended from the Chief Joseph Band of Nez Perce; Chief Moses/Sinkiuse-Columbia Band; Entiat Band of Chief Silicosasket; and Palus Tribe, Chief Kamiakin.  Bugs Indian name was La-pit-he-sham-tukesh – Two Moons, given to him by his late grandmother Sadie.

He worked as a tribal employee at Food Distribution for many years, then as a courier for the casinos and later as a flagger for road construction.

Bugs was a beloved member of the community. He was active member of the Washat/Seven Drum way of life.  He was a traditional care taker, in ceremonial dressings.  And he lead others into Grandfather Sweat almost daily, he was taught this way by the late Ed Covington Sr. After Ed's passing Bugs carried on the teachings and mentored other men in traditional ways and served them by gathering medicine, wood and starting the fire for the sweat several times a week.

If Bugs had a hobby it was following his grandkids, nieces and nephews to watch ALL of their games. As a former basketball player and referee he often took it upon himself to help coach the grandkids after their games. It didn't matter what sport or season, he would travel to go cheer and 'coach' in the car he won from the casino.

A dressing was held April 3,2020 at Precht Harrison FuneralHome with Washat services following at 8 p.m. at his home. Sunrise services were held April 4, at 7:30 a.m., at the Little Nespelem Cemetery.