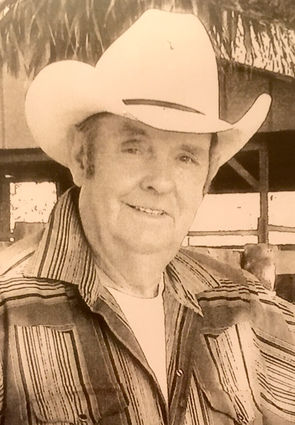 Don McClure was born in Spokane on February 15, 1928, to Robert R. McClure and Meryle A. (Jones) McClure.  He lived his entire life on the Nespelem ranch that began when his father and grandfather homesteaded on Moses Mountain.  Don attended 11 years of school at Nespelem, then graduated from Okanogan High School in 1946.  He married Geraldine Booth on September 4, 1949, and they celebrated their 70th anniversary last fall. They raised their five children and several foster kids on the ranch.

With help from his kids and wonderful wife Gerry, Don increased the size of the McClure ranch near Nespelem, raising cattle and timber. Don said his start in the cow business was the 24 dairy cows he and his brother Norm milked by hand twice each day for the cream to be sold in town. The family later ran beef cattle on the Colville Reservation and Colville National Forest. Many memories were made over the years up at "cow camp" near Swan Lake every fall. Sons Davey and Gary joined Don in the cow business. The family also logged land, and the ranch has been a designated Tree Farm for over 50 years. Don continued to work the ranch even after "retirement" fixing fence and helping move cows into his 80s.

Don led many horseback trips into the Pasayten Wilderness with family and friends. He was a Scout Master for the local Boy Scouts of America and hosted many camporees at the North Star meadow, including the International Camporee one year. Don and Gerry were also 4H leaders for 20 years. Later, the couple took many road trips with friends and spent the winter in Florida with friends for over 20 years. Don also wrote The Homesteader's Son a book about local history in the Nespelem Valley.

Don was a member of the Washington Cattlemen's Association for over 30 years, serving 2 years as president. He also was president of the Nespelem Grange which he and Gerri were very active in. Don also served as a board member for the Okanogan County Weed Board, Nespelem School, and Nespelem Community Church. Gerry and Don attended church at the Coulee Dam Community Church for many years and later found a church family at the Grand Coulee Community Church. Don would sometimes share his love of music with the congregation, bringing his guitar and singing during service.

Don was a hardworking man and did his best to be a good father, grandfather, neighbor, and friend. His love of life and humor will be held in the memories of those who knew him. He lived a full life with his beloved Geraldine.

He loved and took pride in his children Sandi (and Dave) Everett, Gail (and Jeff) Runkel, Gary (and Laura) McClure, Myrna (and Ron) Crawford, and Dave (and Joy) McClure, 11 grandchildren, and 18 great-grandchildren. He often remarked, "There's not a cull in the bunch."

Don was preceded in death by his parents and his brothers, Norman and Delbert McClure. A graveside service was held at Spring Canyon Cemetery on March 20, and a memorial gathering will be held later this spring or summer.

Fond memories and expressions of sympathy may be shared at http://www.stratefuneral.com for Don's family.