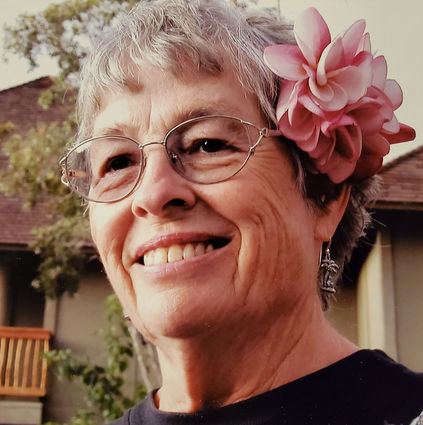 Lura Anne Sanderson Hartman left this world to be with the Lord on Thursday, March 5, 2020. Anne was born September 9, 1929, in Hollywood, California, to Marjorie Vere (Freeburger) Sanderson and George Clifford Sanderson. She and her identical twin sister, Leila Jean were in numerous movies until age seven as studios often used twins to avoid overworking child actors. The twins were especially close to their Aunt Dora and Uncle Jim Howson who often picked the girls up in their motor home for exciting trips to parks or to visit relatives.

When they were high school juniors Anne, Jean and their father moved to Mason City (later called Coulee Dam) Washington, where they worked at the local movie theatre owned by the Hartman family. Their hourly wage was 29 ½ cents! Jean and Anne graduated from high school in 1947. On June 25, 1948, Anne and Rodrick Bruce Hartman were married and raised their four daughters there; Cindie, Claudia, Cecilia and Cory. Anne was a telephone operator and helped Rod run the theater and a small diner called the Pronto Pup. They became very active in Rotary, Chamber of Commerce and the local Community Church. In l967 the theatre property was purchased by the government for construction of the third powerhouse. Consequently they built the Coulee House Motel which they ran successfully for 20 years.

As a young woman Anne had many interests. She was very creative, dabbling in art work and ceramics. She had her own kiln for pottery and created many Christmas mugs and ornaments that her girls still enjoy. She was anxious to turn 21 as that was the legal age to become a brownie/scout leader . Her favorite scouting activity was teaching the girls to knit..... a hobby she enjoyed clear into her 80s when her arthritic fingers wouldn't work for her anymore. In the summers she would take the girls camping at nearby sites like Porcupine Bay or Lake Chelan and let them each bring a friend.....that was eight little girls in a green canvas tent! She also did lots of canning. It was the girls job to put the pears or peaches into the jars as their hands were small enough. She continued making berry jam clear into the years in assisted living where she would share her little jars with all the other residents. But her biggest passion was her doll collection. She collected everything from Barbie dolls to Madame Alexanders. Her favorites were the Little Red Riding Hood and Little Women dolls. Her son-in-law Randy, built her numerous doll cabinets to display her collection.

In later years, after the motel was sold, Rod and Anne enjoyed many trips to Hawaii for the winter or traveling down south to the California or Arizona area. They often traveled with their River City Rambler friends to nearby parks. In 2007 they moved to Spokane to live in the Riverview Retirement Community and be closer to their children. After Rod passed in 2011, she moved to Park Place assisted living in Spokane Valley. She was very happy there and they took good care of her.

Anne was preceded in death by her husband of 63 years, Rod; her parents, older sister Marie and younger brother George, and son-in-law Randy Bjorklund.

She is survived by her sister Jean Boe in Clarkston, Washington; her four daughters and spouses: Cynthia and Michael Smetana of Kelso, Washington; Claudia Bjorklund of Spokane, Washington; Cecilia and John Gentry of Spokane; and Cory and Blair Smith of Moses Lake, Washington. Her 12 grandchildren: Michael Smetana (Ashley), Angela Martinez Smetana (Osman) and Julia Hoelter Smetana(Micah); Craig(Nicole) and Keith (Janell)Bjorklund and Shelly Bjorklund Hicks(Bryan); Sara Gentry Close(Ken), Nicole Gentry Edwards and Brad(Jill) and Garett(Danyelle) Gentry; Jeremy and Jaimi Smith as well as son-in-law Eric Smith. She also lives on through her 28 great-grandchildren.

A memorial service will be held in May at Colbert Presbyterian Church in Colbert, Washington. Burial will be at Spring Canyon Cemetery. Donations can be made to Hospice of Spokane or the charity of your choice.