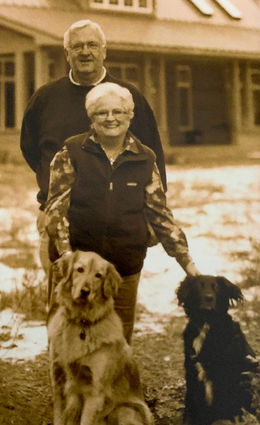 He was predeceased by his wife of 56 years, Stephany (Stenton) Gray. Surviving him are his sister Joanne (Gray) Leitch, and his six children: Lucian (Geralyn), S.Peter (Dana), Mark (Erin), Constance, Philip (Karla) and Peggy. With 14 grandchildren and three (soon to be four) great-grandchildren and numerous nieces and nephews, family was his biggest passion.

Born and raised in Mason City/Coulee Dam, Washington, on the Colville Indian Reservation the son of Joseph Edward Gray and Mary Adeline (Seaton) Gray, he was a graduate of Coulee Dam High School in 1953.

After graduation, he attended Eastern Washington State College where he played basketball, before matriculating and graduating from Gonzaga University in Spokane in 1957. Graduating at the top of his ROTC class, he was awarded an officers' commission into the regular army. After postings at Fort Knox and Fort Lewis, he left the army for a career in banking, starting as a collector for Spokane and Eastern Bank which later merged with Seattle First National Bank. He retired as President of Seafirst Bank in 1998.

A true Washingtonian through and through, he also attended graduate school at the University of Washington, Mr. Gray maintained residences on both sides of the Cascades, including one on the Yakima River where he and his beloved wife Stephany spent many days fly fishing.

A long-time parishioner of St. Louise in Bellevue, he also attended St. James Cathedral in Seattle.

Donations in his name may be made to: