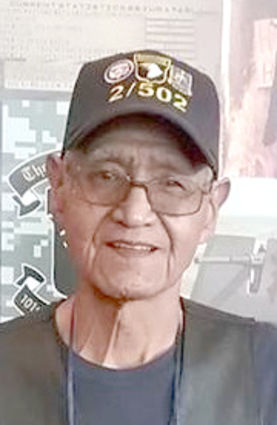 Donald Harry James, 72, of Coulee Dam, Washington, passed away surrounded by his loving family at his home following a brave battle with cancer, Friday evening, December 6, 2019. Born in Keller Washington to John & Susan Tskulnast-James on Thursday, February 27, 1947, Donald attended Coulee Dam High School, in Coulee Dam, graduating "Class of 1966". On September 20, 1966, Donald enlisted in the US Army, honorably serving two tours for his country during the Vietnam Conflict with the 101st Airborne Division. Receiving his AA degree from San Jose Community College, Donald worked as a Data Processor for the Bureau of Indian Affairs, from 1989 until his retirement in 2000.

A proud member of the Colville Confederated Tribes and devout Catholic, Donald belonged to Sacred Heart Catholic Church in Nespelem, Washington. Always active, he had been in the Omak Stampede Suicide Race, done bull riding, participated in and coached community league basketball and enjoyed spending time in the out of doors cutting wood. Though a huge Seahawks fan who tried to never miss a game, all who knew Donald, found his greatest joy in life was time spent spoiling his grandchildren, each of whom was "the light of his world."

Fond memories and expressions of sympathy may be shared at http://www.stratefuneralhome.com for Donald's family.