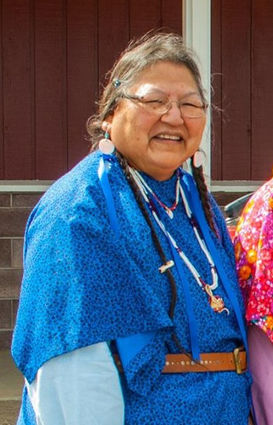 Gloria was born March 28, 1949, in Nespelem, Washington, to Joseph and Lorraine (Sam) Atkins. She attended Nespelem Grade School and Coulee Dam High School, graduating in June 1967. She attended Eastern Washington State College (Eastern Washington University), graduating in 1970, after attending Eastern for 16 straight quarters. She met Albert Andrews and they were married in August 1970. She started her career, working as a kindergarten teacher in the Wellpinit School District. Her teaching career was interrupted by the birth of her sons James (1971) and William (1972). She resumed her career, this time working in Higher Education for the Bureau of Indian Affairs at the Colville Agency. She continued working for Higher Education after the Program was contracted by the Colville Confederated Tribes. She worked as the Director of the Higher Education Program (45+ years) until her passing. She was dedicated to her profession and well-respected by her coworkers and all the people she interacted with – tribal, federal, and state.

She was preceded in death by her parents, sisters: Marguerite, Janice Jo, Nadine, and brothers: Richard and Tony.

Gloria was a member of the Confederated Tribes of the Colville Reservation (Psquosa), and she was also very proud of her Yakama ancestry. She was a very cultural and traditional person and was a member of the Nez Perce Longhouse. In addition to her career, she was also an active member of the Nez Perce Longhouse Committee and the Wenatchi Advisory Group. She was a gatherer for the Longhouse, and enjoyed root digging, picking berries (service berries, huckleberries, and choke cherries). In addition to gathering and digging for the Longhouse, she also gathered for family events. She was a very family-oriented person and will be dearly missed by those left behind.

Funeral services will be as follows: Dressing and Viewing Service were Tuesday, December 3, 2019 at 1:00 pm. After the Dressing Service, she was brought up to the Nespelem Community Center for overnight services. Rosary service will start at 7:00 pm, with Washut service at 9:00 pm. On Wednesday, December 4, a funeral mass will start at 8:00 am, followed by Washut services. She will be taken to her final resting place at the Little Nespelem Cemetery.

Fond memories and expressions of sympathy may be shared at http://www.stratefuneralhome.com for Gloria's family.