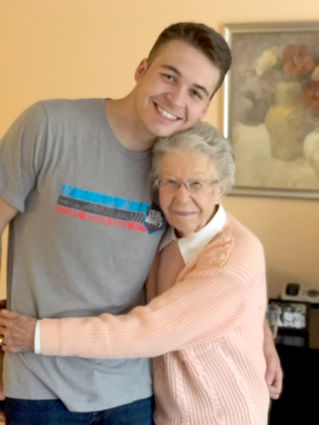 As you may have heard before, it's the "dash" between the day we are born and the day we die that matters! For those who called her mom, grandma, and great-grandma, it's her "dash" that we celebrate today with you, her extended family and friends. You were very important to her!

God creates each one of us as a "one of a kind," and Mom was surely that...ONE OF A KIND!

The middle of three sisters, she was a tomboy in her younger years. She could out-run, out-hit a baseball and out-throw a football farther than any boy in the neighborhood! Once, the three sisters got locked in an abandoned car. She hit the window out with her fist, without a scratch, while her younger sister was cut on her hand from the broken glass. She was still all girl! She made sure her hair was perfect and her clothes matched!

She was an avid sports fan! Cougs and Husky football and Mariners were her favorite teams to watch. When they played well, she was one of their best fans, but when they didn't, she would cuss them out like a trucker! :-) She knew the players' names and positions through the 2018 season!

Mom met Dad while she was a freshman at WSU and he was a senior. He was working under a car and saw her walk by. Her legs caught his attention and he decided right then and there he was going to marry her. Turns out he worked with her mom in the campus cafeteria. She married the love of her life six months later, on September 4, 1943. They had one daughter and two sons.

Mom and Dad moved to Hungry Horse, Montana, in 1947 where our dad worked as an electrical engineer helping to build the Hungry Horse Dam and stayed there until moving to Seattle in 1957. Those 10 years were filled with many Greiners and extended family, spending summers at the family cabin on Flathead Lake. Family has been the top priority for both Mom and Dad. When asked, she said those were her favorite years ... her kids weren't much trouble then!

Mom and Dad moved to Electric City in 1971 after their three kids were grown. Those were wonderful years, building great friendships and spending many hours, days and weeks on the Banks Lake Golf Course, which our dad spearheaded to have built, or working in the yard and having breakfast at the R&A, Monday through Friday, until our dad passed away.

Mom loved her family more than anything! In addition to her three kids (and spouses), she had seven grandkids (all married) and 15 great-grandkids. Eighteen months after our dad passed away in August 2009, Mom moved back to Seattle (Mill Creek) into a wonderful retirement facility, where she lived until the Lord took her home on March 9th ... the day after her 96th birthday! She had a most love-filled 96th birthday; she said she was ready to have a party and she had the best smile when she was either able to see her family in person or when those out of town FaceTimed her, including a great-grandson stationed in the Air Force in Qatar!

Mom had developed wonderful friendships where she lived and was loved by so many. We want to thank the wonderful care team who lovingly helped her through her last day.

Mom knew the Lord as her personal Savior and was at peace as her time on earth was coming to an end. On her birthday, she told one of her sons, "He told me I am going to die tomorrow." He asked her, "Who told you?" She said, "Dad." He had her repeat that to make sure he heard her right and she again said, "Dad told me I am going to die tomorrow," with absolute confidence and peace; and she did! She was so ready, and her three kids were with her when the Lord ushered her home!

We love you, mom, grandma and great-grandma ... you are our hero! Thank you for the wonderful heritage you gave each of us. 'Til we meet on the other side ... much love!