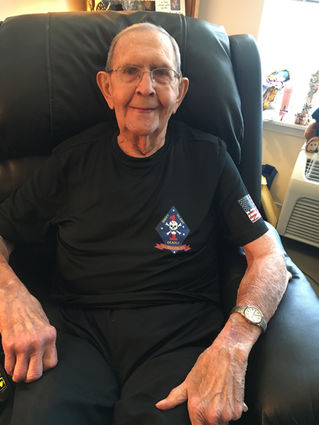 Bob was born December 4, 1924, in Aberdeen, SD, to parents Otto Edwin Mueller and Margaret Arntz Mueller. From April 1943 to August 1945, Bob was with the Army's 346th Infantry Division. He received two Bronze Stars and the Purple Heart while seeing action in France and Belgium, including the Battle of the Bulge.

He graduated from the University of Wisconsin in 1948 with a Bachelor of Science in Electrical Engineering. Bob married (Delores) Jean McCabe in 1955 in Lake Andes, SD, and they made their first home in Huron, SD. His entire career was spent with the United States Bureau of Reclamation (USBR) at various dams, power plants, and power transmission stations throughout the west and northwest. In 1967 the family moved from Page, AZ, to Coulee Dam, WA, where Bob worked prior to retiring as Chief of Construction at the Grand Coulee Project in 1983. Bob and Jean lived in Coulee Dam for 50 years.

Typical of "the greatest generation," Bob was deeply involved in volunteering and giving back to his community. City and county politics, educational boards, the Democrat Party, WSU Extension including gardening and canning, the Tax Aide program, the Grand Coulee Dam Senior Center and St. Henry's Catholic Church were all recipients of his time and talent. He most enjoyed cooking and gardening throughout his active retirement.

He will be remembered as a man of honesty, humility, wisdom and integrity. His Catholic faith was a mainstay in his life, attending daily mass for years.

Rosary service will be at 7:00 p.m. on Friday, November 2, and a funeral mass will be celebrated at 10:00 a.m. on Saturday, November 3, both at St. Henry's Catholic Church in Grand Coulee, WA. A reception will follow at the church hall.

The family would like to thank the caring staff at Moran Vista and Kindred Hospice of Spokane.

Donations can be sent to St. Henry's Catholic Church in Grand Coulee.