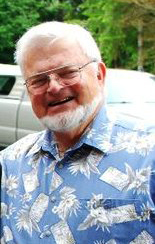 Richard "Dick" Riehl, 86, passed away Sunday, August 26, 2018, in Burlington, Washington. He was born in Tacoma, Washington, to Lock and Bernice Riehl, where he spent his summers on Vashon Island at the family's summer home. Dick graduated from Stadium High School and married his wife of 67 years, Barbara Bemis. They lived in Tacoma, where Dick owned and operated a Richfield Gas Station, until which time they moved to Bellingham, Washington, where he finished his teaching degree at Western. After graduating, Dick accepted a job teaching Woodshop, Metal Shop, and Coaching, and many other activities with the Concrete School District for 28 years. Once retired, Dick and Barbara moved to Grand Coulee, where they spent many happy years enjoying, camping, swimming and always working on a wood project in his shop. Dick was well known for his handcrafted crosses.

Dick was a lifetime member of the Lions Club, and a Concrete Volunteer Fireman.

He was preceded in death by his parents and two sisters: Rhea Wesson and Nancy Hoff.

A Memorial Service will be held in Grand Coulee at a later date.