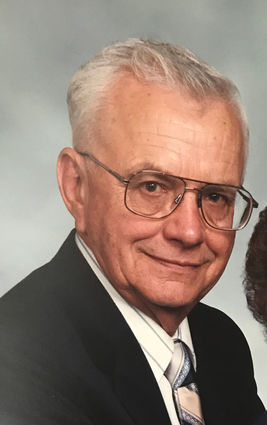 Kenneth Eugene Williams passed away Friday, July 13, 2018, on his 93rd birthday. He was born on July 13, 1925, in Tecumseh, Nebraska, the first son of Fred and Gertrude Williams. He graduated from Tecumseh High School in May of 1944. On July 22, 1944, he was inducted into the U.S. Army at Fort Leavenworth, Kansas and was discharged on August 17, 1946, after service in the Asiatic Pacific Campaign. He received the Purple Heart Medal on December 15, 1945, from wounds received in June 1945 at Okinawa, along with other service medals.

On June 9, 1948, he married Marjorie Maxine Packett in Tecumseh, and had two sons, Michael Gene and John Kimberly. Kenneth and Maxine had celebrated their 70th anniversary on June 9, 2018.

Ken always wanted to be a farmer and for several years he had a first-class dairy farm at Talmage, Nebraska. He worked for the Soil Conservation Service in Johnson County, and in 1958 he joined the Bureau of Reclamation, building dams in Wyoming, California, Arizona and the Third Power House at Grand Coulee Dam, Washington. He retired in 1987 after 36 years with the Bureau of Reclamation.

He spent many hours deep-sea fishing off the Pacific Coast and on Lake Roosevelt.

In 2004, he moved to Spokane Valley, Washington, to be closer to his sons and grandchildren.

He was preceded in death by his parents; brother, Jack, and Jack's wife, Glenna; sister, Ruth Seckman, and her husband, Bill; and nephew, Freddie Seckman.

He was loved and adored by his family, especially his grandchildren, and will be greatly missed.

Inurnment will be at the Veterans Cemetery in Medical Lake, Washington, at a later date.