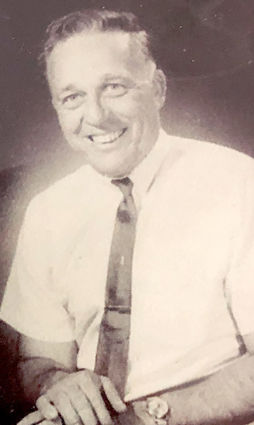 William Eugene "Gene" Fields, went peacefully to be with the Lord and his wife, Betty, in heaven on Friday, June 8, 2018. He resided in Wilbur, Washington; he was 87 years old.

Gene was born to Joy and Herma Lucille Fields on January 20, 1931, in Sandoval, Missouri. His mother nicknamed him Billy Gene; he was the oldest of three children. Gene's family moved to Washington state when Gene was around 11 years old, so that his father could work at the Grand Coulee Dam. Gene attended school in Mason City/Coulee Dam and played sports: baseball and football, while also working part time at the Green Hut. He graduated from the Coulee Dam High School in 1949, was married to his high school sweetheart, Betty Allen, in March of 1950, then welcomed his first child, Gene Lea, in October of 1950. Gene loved his family and worked hard to support them. He worked for the USBR right out of school, helping survey roads, as a Surveyor's Aid, until 1951 when he moved to Warden to become a Surveyor full time. In 1953, Gene moved his family back to the Grand Coulee area in order to start his operator apprenticeship program at the dam. During this chapter of their lives, Gene and Betty expanded their family; they were blessed with two more sons: Edward and Robert, later adopting a daughter, Sara.

Gene enjoyed spending time with his children, going to the beach or out on the boat, and traveling with his family all over the western half of the United States. Gene went on to go through an electrician apprenticeship program, becoming a Journeyman Electrician, which took him to new places such as Alaska, Idaho and Oregon. Gene was a self-trained carpenter, remodeling and building several homes over the years. He also became a certified pilot, often flying himself to/from his workplace. Gene was a dedicated son, husband and father, and will be greatly missed.

He was preceded in death by his parents, Joy and Herma Lucille; his wife of 67 years, Betty; his brother, Gary Fields; and one sister, Arlene Kinne.

A memorial service was held Tuesday, June 12, 2018, at 2 p.m. at the Strate Funeral Home in Grand Coulee, officiated by Pastor Clifford Bresee. Special thanks to Strate Funeral home for helping with funeral arrangements.

Fond memories and expressions of sympathy may be shared at stratefuneralhome.com for Gene's family. Strate Funeral Home, of Grand Coulee, is serving the family.