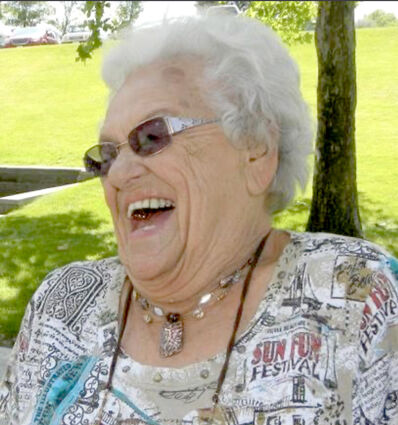 Joyce Ila Behrens was born on January 16, 1925, in Marshal, Minnesota, to Joseph and Mary Wilson.  She passed away on December 26, 2021, three weeks short of her 97th birthday, at Ridgeview Place assisted living facility in Spokane Valley.

Mom was a member the "Greatest Generation," shaped by the hard times of the Depression and emotional roller coaster experiences of World War II.

Her three siblings Mildred, Orville and Glen were seventeen, sixteen and fourteen years older than her, so she was basically raised as an only child. The family moved to Wall, South Dakota, where she would go to school until her sophomore year. Mom was one of the original servers of the free ice water at the Wall Drug. The family then moved to Owanka where she graduated as valedictorian of the class of six students in 1942. In the fall of 1943 at the age of 18 she took a teaching position at a one room school and spent two years refining her teaching skills. The fall of 1944 found her enrolled at Black Hills Teacher's College in Spearfish, South Dakota. During her second year of college, she was selected Swarm Queen of the school's Homecoming festivities. Her final year of college began in the fall of 1946. Her first day of classes she found herself in a chemistry class that only had one other student, a former POW, Richard Behrens. She always claimed the administration was playing matchmaker. By December 8, they were married and graduated in May of 1947. After finding out that South Dakota would only pay her half of what dad would be paid, they packed up their car and trailer and headed to Nespelem, Washington to start their teaching careers and a family.

March of 1948, they welcomed their first child, Richard, followed by Cathy in April of 1949 and Greg in October of 1950. After one wonderful year in Nespelem they moved upstream to Grand Coulee where they would teach for more than thirty years. Mom was a wonderful, caring teacher who developed lifelong relationships with her students. Countless times over the years she would be approached by adults who would say "Mrs. B you were my favorite teacher."

Mom was a lifetime member of Delta Kappa Gamma Society an international group that promotes the professional growth of women educators. She also remained close to her fellow teachers, especially her longtime friend, Jan Wright.

In retirement our parents traveled extensively, enjoying their well-deserved adventures. Cruises, Europe, Disney World, most of the US and following their children and grand kids. They didn't let much grass grow under their feet. When dad passed away in 2007, mom lived at home until her early nineties when she moved to Ridgeview Place Assisted living. The staff took great care of her, and they always commented on how happy and kind she was.

She was predeceased by all her siblings, parents and aunts and uncles.

Joyce lived a full and active life filled with wonderful memories and friendships.

She will be missed by many but forgotten by none who were privileged to know this small in stature but large in personality lovely lady.

Per her wishes a celebration of life will be held this spring.