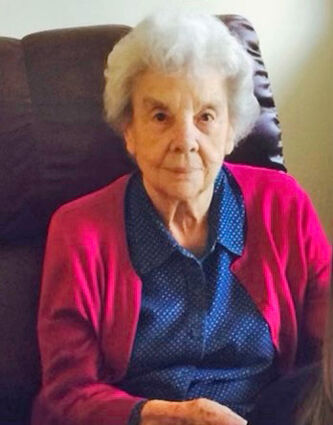 Her parents were Harry and Beatrice (Bock) Little. She was raised in Almira, Washington, and along with her sister Mary, enjoyed being raised in a small town.

Betty graduated from Almira High School in 1941. After high school, she attended Washington State College for two years before marrying her husband of 56 years, John Richard McNeil on August 16,1943, in Davenport, Washington. They had one son, John Harry.

From then on her little family became her world. She enjoyed all aspects of family from traveling together, to baking pies, birthday cakes, and making chicken and noodles for anyone "under the weather." One of her proudest moments was watching not only her son, but both grandchildren graduate from college.

Betty loved to travel the world and felt blessed she was able to go on family vacations with her sister and brother-in-law, along with her husband, son and family. She had a sharp mind and was an avid reader. She read up to the day she passed.

Betty was initiated into the Order of the Eastern Star #108 in Almira on June 27, 1941. She was especially proud and honored to belong to this organization and on June 27 would have been an 80-year member.

She was proceeded in death by her parents; husband John R .; son John Harry; grandson J. Kenneth; and sister and brother-in-law Mary and Ted Rice.

She is survived by her daughter-in-law Carolyn McNeil; grandchildren Molly and John R II (Ashley) and nieces Marcia (Mel) Henkle and Marianne Bechtol

Graveside services were conducted at Greenwood Memorial Cemetery in Spokane on June 22, 2021.