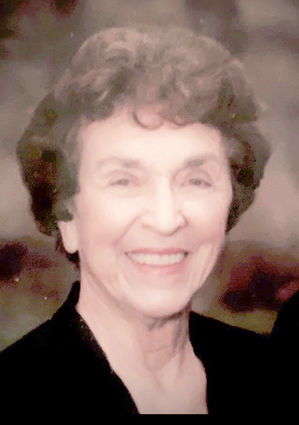 Mickey's growing up years were spent on her family's farm. Her mom helped her dad in the fields so her grandfather who lived with them took care of the kids. She also had two bachelor uncles that lived nearby and were very much a part of their family.

Mickey graduated from Grand Coulee High School in 1951. While in high school she was Miss Grand Coulee and was one of 50 girls representing each state to pour symbolic gallons of water into Banks Lake while it was being filled. Mickey graduated from Washington State College as a teacher. Later she received her Master's Degree in Education at Gonzaga University. She taught school for 16 years until she decided it was more important to be at home and care for her daughters.

She married E. Bernard Kendall December 19, 1959. They celebrated their 60th wedding anniversary last December. They both taught school in Ephrata and after a few years began farming Bernard's family farm in Hartline. Their three daughters, Margaret Lynne, Barbara Diane, and Linda Michelle were raised on their farm.

After retiring from farming Mickey and Bernard built a home at Hanson Harbor, which they dearly loved. They especially loved the abundance of wildlife that they often saw. Mickey enjoyed boating and especially water skiing. She skied with a single ski until she was 79. She was the first woman to water ski on Lake Roosevelt.

Mickey's biggest joy in life was caring for her children and grandchildren. She was very much a giver and was always there for them. She was always welcoming to friends. A visit and the wonderful meals that Mickey prepared were always a treat. She is a member of the DAR (Daughter of the American Revelation – Esther Reed Chapter, Spokane, WA)

She is survived by her husband, Bernard Kendall, and three daughters and their husbands: Lynne and Joe Coppersmith, Davenport, Diane and Jim Leffel, Ritzville and Linda and Paul Boyer, Wilbur. Mickey's grandchildren are Kendall and Nicole Coppersmith, Matthew and Erica Leffel, and Jacob and Megan Marshall. She is also survived by two brothers and their wives, Roy and Pat Rice, Lacey, and Richard and Kathy Rice, Grand Coulee, and many nieces and nephews.

Graveside services will be held Friday, February 21, at 10:00 a.m. at Spring Canyon Cemetery in Grand Coulee. A celebration of Mickey's life will be held at 1:00 p.m. at Strate Funeral Home in Davenport, WA with Pastor .Kendall Goodfellow, officiating

Memorials may be given to the Lincoln Hospital Foundation in Mickey's name at 10 Nichols Street, Davenport, WA 99122. Fond memories of expression and sympathy made be shared at http://www.stratefuneralhome.com for the Kendall family.