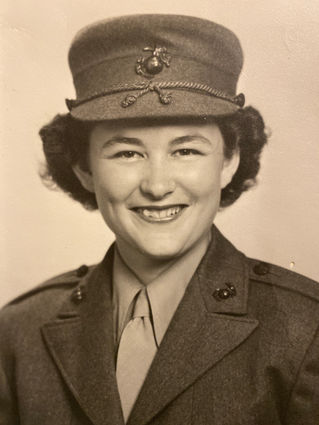 Josephine Mary Brim was born in Salem, Oregon, on January 4, 1921, to Flora and Richard Brim. She spent her early childhood in Steptoe, Nevada, where her father worked the family lead mine. She was the third of five children. Later, the family moved to work on the Boulder (Hoover) Dam project, and later the Grand Coulee Dam. Josephine graduated from Mason City High (Coulee Dam) with the Class of 1938.

On March 22, 1943, she signed up with the United States Marine Corps for "The Duration." With both in uniform, she married Ed Ayers on September 11, 1944. Sergeant Jo Ayers was discharged on October 9, 1945. They returned to Coulee Dam, where Ed worked as an Electrician, and they raised their four children. The family moved into their home on Spokane Street in 1953, where Jo lived for the next 66 years. While her family was young, she taught Sunday School, was a Cub Scout Den Mother, and Girl Scout Leader. Her adult affiliations included the Coulee Dam Community Church, the Order of the Eastern Star, and the Women Marines Association.

G'maJo's heart always centered on her family (many of whom were family by choice, rather than blood). Josephine found great joy in hunting deer, riding horses, picking huckleberries, and canning everything from fruit to venison. She was never happier than when her "family" filled her home with music and singing.

She is survived by her four children: Alice Bartley (Ed) and Frank Ayers of Coulee Dam, Ellen Arment (Jay) of Spokane Valley, and Robert Ayers (Maggie) of Spokane. She enjoyed six grandchildren, four great-grandchildren, and a gazillion nieces and nephews who knew her as Auntie Jo.

A memorial service for Josephine will be held at the Coulee Dam Community Church (Stone Church) at 1:00 on Friday, the 29 of November. Mom had requested that in lieu of flowers, donations be made to your favorite charity.

A SPECIAL NOTE TO ALL WHO KNEW & LOVED "G'maJo":

Since so many of us have memories, stories, and pictures that we wish to share of our times with G’maJo, we will be collecting them online and will share them after the service.

If you are able, PLEASE send these through https://gmajo.muchloved.com If attaching pictures, include names, dates and locations.

If this doesn’t work for you, bring your written memories and pictures, and we will photograph them for the website, following the service, and you may take them back home."