No rest for Raiders in tie and loss 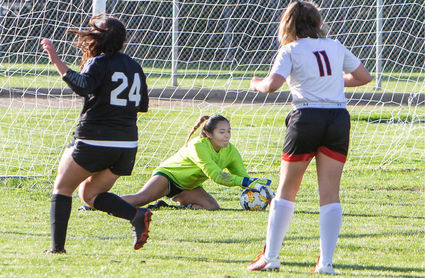 Goalie Kyona Edmo makes one of 10 saves in the game against Omak. - Jacob Wagner photo

The Lady Raiders soccer team broke even with Omak and lost to Liberty Bell last week, both games played with nine players per team.

Maddie Toulou scored two for the Lady Raiders and Bryn Chaffee scored one in the game.

"Kyona Edmo played a great game in the goal; she had 10 saves," said Consultant/Trainer Randy Semanko.