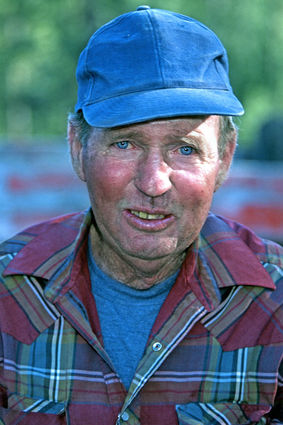 Larry Eugene Green Sr. was born on July 13, 1935, to Raymond and Dorothea Green in Spokane, Washington. He passed away May 12, 2019, in Grand Coulee, Washington. Larry was the third of four brothers, raised on a ranch above Elmer City, Washington, where helearned many skills which he would use all his life. After graduation from Coulee Dam High School in 1954, he and Gaylene Pryor were married, and he went to work at Lincoln Mill below Creston. At Lincoln, his work included running on the logs in the mill pond with his peavey and corks, and shortly being promoted to running the double drums.

From Lincoln, his logging adventures took him to Inchelium, soon moving to Keller to operate the service station. At 19 years old, he was driving logging truck, felling trees, building roads, and doing all mechanic work associated with logging. He worked for Pooler Logging, Bush Aubertin Logging and Whitelaw Logging all in the San Poil Valley. He made lifelong friends in the logging community that carried into the next generation.

During this period, Larry's family grew with the birth of his four children and he moved them to Elmer City proper, a great place to raise a family.

When he decided to quit logging, welding was his next occupational choice. Larry worked out of the Spokane Union Hall, and he was very proud to be a member of Boilermakers Local 242.

Larry welded on many dams in the Pacific Northwest, including Dworshak Dam in Idaho, Chief Joseph Dam, Grand Coulee Dam, and Boundary Dam. He was a very talented welder and was always in demand.

He joined the Okanogan County Fire District No. 2 in Elmer City in the mid-1960s. His mechanical and welding abilities, as well as his instinctive firefighting skills learned through logging, were greatly appreciated by the fire district in this small town.

In the early 1970's, his dad needed help, and his life came full circle. He and his family moved to the Ranch in Elmer City and his ranching life began again. He was called upon by many friends and others to help with their animals. He loved all animals and always treated them with the kindness and respect they deserved. He knew his cows by name and he not only loved his horses, but they loved him in return. Larry was still riding horseback into his 80's. He could and would do anything in his power to treat an ill or wounded critter, one year performing 22 c-sections while only losing one cow. He raised his family to use these same ethics, and they were all good horsemen and cattlemen, mothers and fathers, and he was very proud of them.

Most summers Larry would plan a horseback trip to the Paysayten Wilderness, sometimes with friends and often with family. He was happiest at these restful times at Williams Lake, North Lake, Hidden Lakes, Cowboy Camp, Scatter Lake, Eagle Pass, Buttermilk, Cougar Lakes, Cathedral Peaks, Haney Meadows, Fool Hen, Gun Barrel Camp, Ptarmigan Lake and even to Apple and Pear Lakes near Mt. Rainier. On these trips he always did the cooking and camp work. He was like a wizard – the guy who couldn't find his truck at the Walmart parking lot always knew exactly where he was in the wilderness.

Larry retired from ranching in 2014. His last few years were spent with family, going to ball games and wrestling matches, and some short trips here and there. He was a simple man, direct, tough, strong, thoughtful and true. This sweet old cowboy that we all loved is survived by his wife of 64 years, Gaylene, his four kids, Larry Green, Jr. (Becki), Carmen Farver (Scott), Laurel McLean, and Kerry Green (Leah). These kids presented him with 11 grandkids and 14 great grandkids. He also left behind his cats, BlackyWhitey and 30-30; dogs, Baby Driver, Jake, and Timmy Biter-Barker and we all miss him.