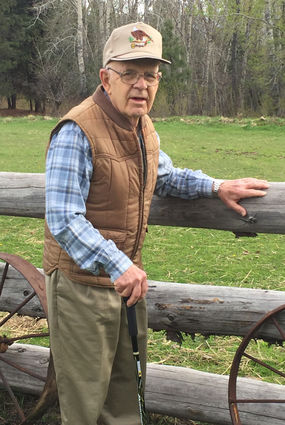 Dick and his late wife, Nancy, moved to Electric City in 2003 to spend their retirement serving the small Grand Coulee Seventh-day Adventist Church. Following Nancy's death in 2005, Dick moved to Coulee Dam in 2014. He is remembered by his immaculate lawn, friendly smile, and helpful ways around the Grand Coulee area.

He was born in 1934 in Sheridan, Wyoming, to homestead parents Chester and Shirley Jarrett. He is survived by two children: Bill Jarrett, of Galt, California; and Debbie Buehler, of Loveland, Colorado. He has five grandchildren and eight great-grandchildren. Dick served his country during the Korean War 1953-1955, then continued in the Army Reserves from 1955-1962.

As a woodworker, Dick served the Seventh-day Adventist church for 30 years through the management of various wood furniture manufacturing plants, known as Harris Pine Mills. This service provided many high-school and college students with work skills and employment opportunities as they pursued higher education. He then started Santa Rosa Crating, an industrial crating business, in 1981 until his retirement.

He will be remembered on May 18, 2 p.m., during a memorial service at the Grand Coulee Seventh-day Adventist Church, 103 Continental Hts., Grand Coulee, Washington.

For more information regarding Dick Jarrett, his memorial service, or the college fund in his honor, write an email to RememberDickJarrett@outlook.com.