Raiders wrestle at national tourney on the Washington state team 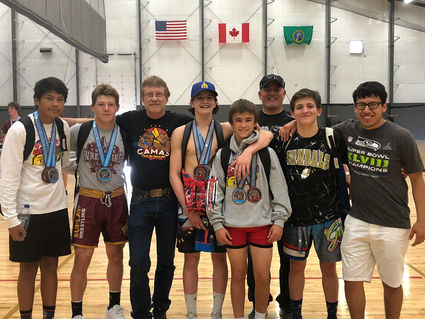 Horn and Nichols were both state champions this past year in their respective weight classes, wrestling for LR.

"Competing in statewide freestyle and Greco Roman wrestling all spring, these Raider wrestlers have not taken any time off," said Raider Assistant Wrestling Coach Victor Camarena. "Their commitment is paying off as they have wrestled in hundreds of matches this past spring."

The four qualified for Fargo by succeeding at the Washington State Freestyle and Greco Roman Championships in Centralia back in May.

"In order to qualify, they needed to be in the top three, in the state, at their respective weight class in both Freestyle and Greco, which they were," Camarena explained.

"After qualifying, they needed to attend team camps prior to going to Fargo for nationals. It was here that they partnered with other elite-level wrestlers (several state champions and all-Americans) from our state to prepare for nationals in July," he added.

The four Raiders joined 89 other Washington wrestlers, for a total of 93 young men representing the state.

"This is only the highest level of high school wrestling in the country: getting to compete for your state against the rest of the country's elitist athletes," Camarena said. "Team Washington panned out quite well when it was all said and done. The Men's Cadet and Junior Greco teams both finished second in the nation; as for the Women's Cadet Freestyle team, they finished fourth in the nation and the Junior Women's Freestyle finished second in the nation. Although Raider Wrestling did not have any all-Americans, they did walk away winning some matches at the national level and with a wealth of knowledge to share with their teammates this coming season."