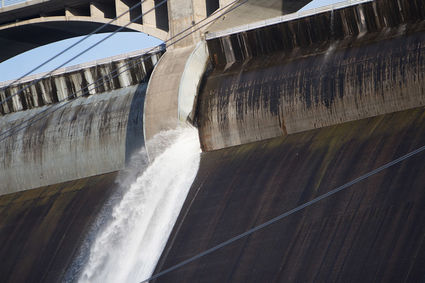 The third drum gate at the top of Grand Coulee Dam has been leaking since summer. A new attachment has been proposed for maintenance of the gates that help control the level of Lake Roosevelt. - Scott Hunter photo

Grand Coulee Dam could get a new fixture for help in repairing the big gates at the top of its spillway, one of which has been leaking since last summer.

The Bureau of Reclamation is seeking public comment to identify issues and concerns to be addressed in an Environmental Assessment for a proposed drum gate maintenance structure at Grand Coulee Dam.

A major leak on drum gate three this year prevented the bureau from spilling water for a backdrop for the Laser Light Show. At that time, the agency stated it would not be able to spill water for the laser show until 2016, when the leak could be fixed as the level of Lake Roosevelt could be lowered.

A newly proposed maintenance structure, a special bulkhead to keep water out while work is done, would assist the agency in overhauling and maintaining the 11 drum gates that help control the elevation of the lake.

Those drum gates are 75 years old and are in need of significant maintenance, the Bureau said in a press release Monday.

Under one proposal, Reclamation would construct a bulkhead structure that would attach to the dam and provide a water-free space between the bulkhead and the drum gate. This would allow both an overhaul of the drum gates and ongoing maintenance in dry conditions without drawing down the reservoir for extended periods.

When not in use, the bulkhead would be stored, either in the lake or on the shore.

Reclamation is still evaluating options for a bulkhead assembly location, on either the east or west shore of the reservoir.

Under a "No Action" alternative, the Bureau would continue maintenance as it has in the past, in a set schedule and at unplanned times. The agency would set maintenance during low water times when possible, but there could still be unavoidable, unplanned maintenance at other times of the year.

The Bureau stated that the drum gates will soon require extensive work due to their age and condition that could only be accomplished with an extended reservoir drawdown of up to 12 years.

Reclamation will use the public feedback to help develop alternative options and analyze the environmental impacts of the proposal.

The Environmental Assessment will evaluate the impacts of each alternative on the human and natural environments. The assessment is expected to be published in June 2016.

The public can send in their written comments on the two alternatives to: Jessica (Gottlieb) Peters, Bureau of Reclamation, Pacific Northwest Region, 1150 N. Curtis Road, Suite 100, Boise, Idaho, 83706, by Dec. 4, 2015, or email jgottlieb@usbr.gov.