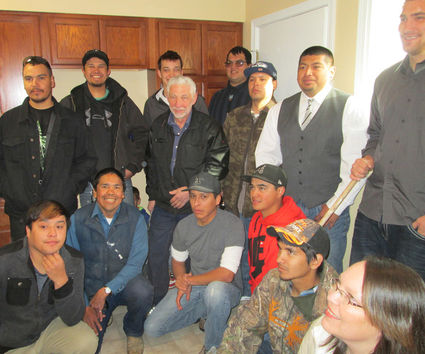 It could easily have been advertised as a "show" home.

Some 19 new and recently "skilled" workers, along with tribal officials, showed up last Thursday to show off a tribal-owned home in east Coulee Dam that was remodeled using trainees - 17 men and two women.

Actually, TERO (Tribal Employment Rights Office) showed off two houses - one on Camas Street and the other just a short walk away. The one on Camas qualified as the "before," and the one just across the back lawn on Central Drive was the "after."

TERO Commissioner Lawrence A. Jordan saw the show home as an example of what can be done with tribal-owned houses using recently trained workers to do the work. He explained that everything but the wiring was done by the class of 19 young men and women learning new skills.

Ed Hensley, certified trainer for the Laborers' International Union of North America, said the effort was successful and that it could become a model for additional renovations of tribal-owned properties in east Coulee Dam.

He credited the enthusiasm of the 19 trainees, who took some 300 hours of training. Now that handful of native workers will be available for other tribal projects.

Jordan said it is another opportunity for the Colville Confederated Tribes to improve neighborhoods, put people to work and prepare them for life-long vocations in the building trades.

The house on Central Drive was renovated from the floor up. New floors were laid, cabinets were installed, all the trim and doors were replaced, everything painted. Except for the appliances, the house was ready for occupancy. 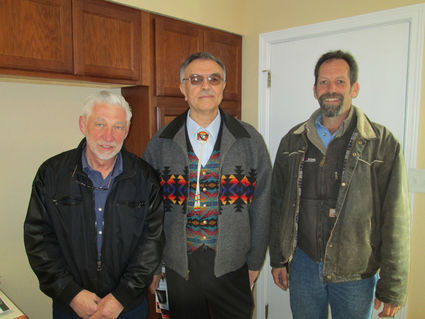 These three all had a hand in the training process of a TERO project to develop building trades personnel. TERO showed off one house and had another one open so the public could see a before and after effort by 19 new trainees. Pictured from the left are Ed Hensley, certified trainer for the Laborers Union; Lawrence A. Jordan, TERO commissioner; and Dan Kowalski, president and training consultant for AAR, a Tacoma company. The trainees remodeled a Tribal-owned house and prepared it for occupancy. - Roger S. Lucas photo

Jordan said he wasn't sure if the tribes would rent or sell the renovated homes. He stated that if they were sold they would generate enough money to continue the effort to improve properties in the area.

It was the beginning of a long program that included a get together at the Coulee Dam Community Room at town hall, with speakers and a barbecue luncheon.

TERO's theme for the get together was: "Coming together to enhance employment and training opportunities for the Colville Tribal members through unity, support, and dedication, striving to be successful and building a strong community effort in team work for the future of the Colville Tribes."

The town of Coulee Dam let the tribes to use the community room without charge, by vote of the council.

TERO screened 93 applicants for the 19 training positions. Ages of the trainees ranged from 19 to 50.

TERO combined with CTER (Council for Tribal Employment Rights) put together the Native Construction Council Initiative Building Construction training plan that could have significant future benefits. The Colvilles plan a $36 million government center at the Colville Indian Agency and a new tribal casino and hotel complex in Omak. And 71 percent of the houses on the reservation are 40 years old or more. These workers and more trainees would be available for employment for these projects.