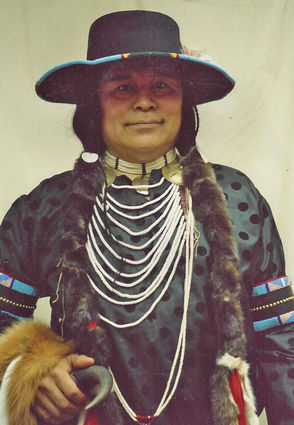 Phil died Thursday, Oct. 4, 2012, at the American Lake Veteran’s Administration Home in Tacoma, of “agent orange” which he contacted in Vietnam. He is an enrolled member of the Nez Perce Tribe.

He grew up on the Colville Indian Reservation in Coulee Dam, and attended high school in Lapwai , Idaho, and Coulee Dam, graduating from Coulee Dam High School in 1964. While there he learned the ceremonial ways of his ancestors in the Old Chief Joseph Longhouse at Nespelem. Phil has expressed some of his childhood in poems such as “First Grade” and “Name Giveaway.” By the time he was 18 years old, “Proviso,” had been translated into 18 languages worldwide. Phil recited it for Voice of America and Radio Free Europe after it won a gold medal for National Poetry Day. Senator Frank Church read it before Congress where Phil later became a Congressional Intern in Washington, D. C. “Proviso” also won top honors at the National Arts Exposition at Scottsdale, Ariz. Mr. George received the Golden Feather Award from the LaGrande Festival of Indian Arts—winning in all categories—including traditional dancing. Proviso was narrated by the late Vincent Price on the Johnny Carson’s Tonight Show and on the Dick Cavett Show. It is now on display in the Western Museum of Art in Texas.

Phil graduated from the Institute of American Indian Arts in Santa Fe, N.M., majored in both Creative Writing and Indigenous Ethnomusicology. As president of the PowWow Club, he groomed and coached a 12-member Swan Dance team of young ladies who held a Command Performance at the White House and for the Ed Sullivan Show in New York City. Phil also attended the University of California in Santa Cruz, Calif., and the San Francisco State University. His education was interrupted by his service in the U.S. Army, as a combat medic in the Vietnam War from 1966 to 1969. His return to civilian life was soon celebrated when he won 1st place Grand Champion at the National War Dance Competition sponsored by the National Indian Athletic Association (NIAA), followed by winning Pendleton Roundup dance competitions four times in Oregon.

His credits also include being listed in the Academy of American Poets, and the International Who’s Who in Poetry. He portrayed the historical figure of Chief Joseph during a 1992 Quincentennial Commemoration. He wrote, produced and narrated Season of Grandmothers for the Public Broadcasting Corporation and has served as consultant for a number of historical books and movies. In 1999, Phil George was nominated by the International Library of Poets to appear in “Poet of the Century Anthology.” Spec. 4, Phillip George of the 241 Medical Detachment, U.S. Army, stationed at Cam Ranh Bay, Vietnam. received the Soldier of the Month and a plaque was mailed to his parents.

A collection of 20 poems called “Kautsas” published in 1978, 1985, and 2000 has been prized by people worldwide. The Nez Perce National Historical Park displays over 10 poems of Mr. George’s throughout their visitor center where he worked as a seasonal Park Ranger. In 1977, the Big Hole National Battlefield hired him to write a peom commemorating the 100 year Anniversary of the 1877 War and the Big Hole Battle that the United States engaged upon the Nez Perce Indians. He called this “Prelude to Memorial Song, 100 Years Later”. Another poem, “Salmon Return”, is exhibited on a Nez Perce National Historical Park sign at the Canoe Camp in Orofino, Idaho. This is where Lewis and Clark learned to make the Nez Perce style of building canoes—an easier and faster method—for the much needed canoes to reach the Pacific Ocean in 1805.

For years, Mr. George has taught and made cultural arts and crafts for numerous family and friends. His travels took him to powwows and celebrations across the country. Perhaps even more rewarding was to watch his poetry unfold through sign language and in colorful, personally created regalia. Some were entranced and entertained with his smooth and powerful movements, bringing back the days of old. Others seek his style and posture, while still others, both young and old, hear the voice of the “Old Ones,” coming to teach us again. 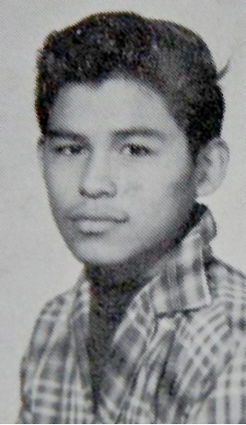 Dressing was at 2 p.m. at the Strate Funeral Home in Grand Coulee, Tuesday, Oct. 9. Rosary and memorial followed at 7 p.m., and Wahluset Services followed at the Nez Perce Longhouse, Nespelem, WA. Funeral services will began at sunrise and full military services at the Chief Joseph Cemetery, Nespelem. Dinner will follow at the Nez Perce Longhouse.

The Strate Funeral Home is in charge of the arrangements.