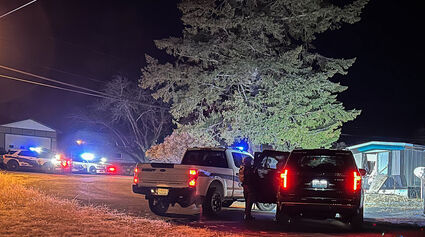 Law enforcement officers focus on a mobile home in Electric City where a man allegedly shot at a bail bondsman who had come to get him for skipping a court date Monday. - Scott Hunter photos

Law enforcement officers from several agencies descended on a mobile home in Electric City Monday afternoon, after a bail bondsman reported he'd been shot at from inside the home and returned fire.

He was there with a warrant to collect Christopher Morgan, 38, who had failed to appear for a court date in Spokane, according to Grand Coulee Police.

The mobile home sits at the corner of Fifth Stre...