Raider football 2-0 after victory over the Scotties 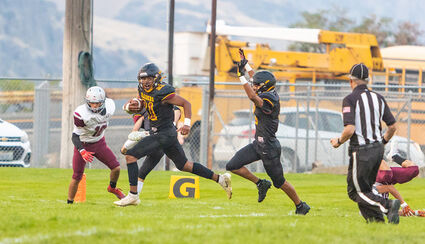 Ivan Alejandre heads for the goal line the first trouchdown in the win against Cowiche Friday night as Bosten Hevener, behind him, blocks a Scottie defender and Chase Marchand signals the TD. - Jacob Wagner photo

The Raiders hosted the Highland Scotties in a smoky Coulee Dam Sept. 9, defeating them mightily and giving them a 2-0 win-loss record for the season.

The Raiders led 42-0 at the end of the first half.

In the first quarter, Ivan Alejandre ran 51 yards for a touchdown, then put the icing on the cake by kicking the extra point.

He put in work kicking extra points after a 36-yard Chase Clark touchd...