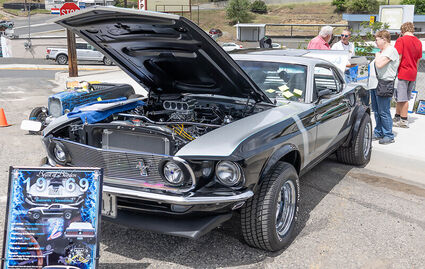 Buzz LeBret, in sunglasses in background, talks with other car buffs at the Diversity Divine Car Show Saturday, where his 1969 Ford Mustang Mach 1, which he started showing at the same event a year ago, took the best-of-show prize and the mayor's award. LeBret said it's been winning all over the country. His kid-size mini Deuce Coupe, seen at left, was the favorite car among kids. - Scott Hunter photo

Motorheads were able to share their love of cars at the Diversity Divine Auto Show over the weekend.

"The show went great!" Sam Hsieh, who hosted the event on Saturday on his Main Street property called Coulee Plaza. "I am so glad that people were willing to come out and participate despite the unknown weather. It was a gathering of car lovers and enthusiasts, family and friends. We all enjoyed the company of each other and chatted up anything and everything about cars. The thing I love most about this show is that it doesn't matter if you have a Japanese import or a classic domestic hot rod, we have it all. It's about diversity and inclusion. And we know that the kids absolutely loved it."

"This is what it's all about," Hsieh said, "getting the community together and having fun. We hope it'll inspire more people to join us as we can't wait to do it again next year!"

Hsieh said that the Ford Mustangs at the event "definitely stole the show!"

Chris Holman, who partnered with Hsieh in putting on the event, said that "this is a show we're going to do every year, and add to it every year and make it bigger and better."

"Grand Coulee, hang on, because next year is going to be a hell of a show," he said, adding that he already has things in the works for next year's show.