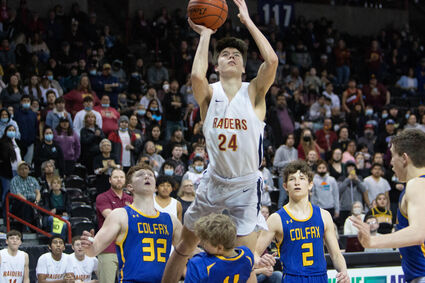 Chase Clark takes a jump shot against Colfax that would have tied the game.

Raider players learned some lessons at the state 2B basketball tournament last week in Spokane where they competed against top teams from around the state.

"That experience of going to state is something you can't take away from these boys," Raider Head Coach Jeremy Crollard said. "Playing in the Arena is a different atmosphere."

At the Spokane Veterans Memorial Arena March 2, the Raiders faced off against the Coupeville Wolves.

Coupeville started the game with a 9-0 run before the Raiders got on the board and started to find their rhythm, finishing the quarter down 15-9.

The second quarter continued that way, with the Wolves leading 28-23 at the end of the first half.

Just two minutes into the third quarter, the Raiders cut Coupeville's lead down to one point with the score at 28-27, and soon took a 33-32 lead with a Brandon Pino layup, followed by an Alonzo Adams three, to go up 36-32.

Chase Marchand hit a couple layups, the Wolves hit a free throw, then Raider Tanner Kiser hit a three, and suddenly the Raiders were up 10 points, 43-33.

The Wolves fought back at the end of the third quarter, but LR remained on top, 43-39.

In the fourth, Adams sank a three and Marchand laid one up to put the raiders back up by nine, 48-39.

The game remained close with the teams trading buckets but the Raiders closed strong, winning 62-53.

"They were way more aggressive than us in the first half," Head Coach Jeremy Crollard said. "They were bigger and stronger and pushed us around. My boys took it until halftime when I told them it doesn't matter how big you are, it matters how hard you play. We adjusted, we went out, attacked. We did more penetrating to spread the floor against them."

The Lancers started the game up 7-0 before LR got on the board with a free throw from Marchand.

LR found their rhythm and started scoring. They tied the game at 11 with three minutes left in the first quarter, taking a one-point lead with a Marchand three followed by a Chase Clark layup to go up 16-13.

Liberty took a 17-16 lead in the final seconds of the quarter.

In the second quarter, Clark regained the Raider lead with a layup, 20-19. The two teams took turns leading, but a Marchand three put the Raiders up 30-26 to end the first half.

The game remained close in the start of the third with multiple lead changes. But Liberty went up by four with a three-point shot and built that lead to 42-32, 48-38 at the end of the third.

The Raiders fought to get back in the game, but a series of three pointers from the Lancers took the game 69-54.

Crollard said Liberty's four senior starters had a big role in the game.

"It was one of those games where we played well, but they're the state champs," Crollard said. "We have tons of good things we can take away from this going into next year. We missed a lot of easy shots. We missed layups, we missed wide-open threes. I wish we could run it back and do it again, but you get one shot for that. Overall, I thought my boys played really well. No one expected us to be here."

Adams scored 17 in the game while Marchand scored 14, and Clark scored 16.

LR played Colfax on March 4 and endured frustration with officials at the end.

The Raiders were up by six with under two minutes left in the game, and an official was making calls that hurt the Raiders, making the calls from far away or while out of position to make them, Crollard said.

"Even other officials came up to me and apologized," he said.

At the end of the game, Clark had hit a basket that would have tied it, but the official called a foul, the points were taken away, and LR lost by two, 79-77, in a "heartbreaking" finish.

"They played such a good game," Crollard said about the Raiders. "To lose in that sort of fashion and let the official take it the way he did. I'm not the type of coach to complain. I've kept my mouth closed until the bitter end. But we got screwed. That ref didn't ref again the next two days. That shows me we were right. Unfortunately, it doesn't change anything. We can't change the outcome of the game. ...  It was a teaching moment for my boys for mental toughness, being able to keep your composure at times like this."

Clark had a "huge game" with 23 points, Crollard said.

"He's one of those kids that needed this confidence and now that he has it, I think he's figured it out now. I think he gets it," Crollard said, looking ahead towards next season.

"I'm proud of these boys," Crollard said. "We came a long way this year. This season was amazing. For me it was the funnest season I've had coaching. These boys are an amazing group. They got along, stuck together, fought together. You always deal with adversity and have bumps, but they kept battling, coming back, proving people wrong that thought we wouldn't be there. We knew the potential."

Now, Crollard said, "their confidence is high. ... Overall it was an amazing year, an amazing season. I told them not to hang their heads, they have to keep them high. Take state as a learning experience and hopefully be there next year and don't make those mistakes again. It was fun, it was a lot of fun." 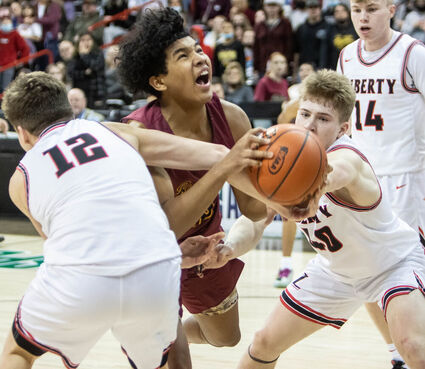