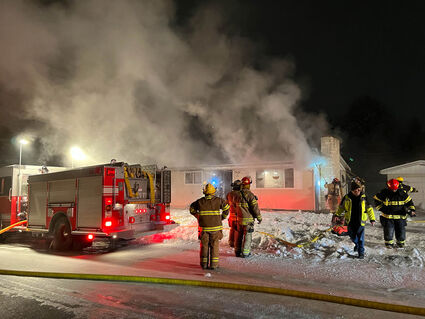 After firefighters took care of hot spots inside Sunday night, some pull at siding material on the eaves outside as they work at venting smoke from a house at 705 Birch in Coulee Dam. A firefighter said it was described as a chimney fire. Much of the smoke in the photo actually may be steam in the frigid temperatures in the teens about 11:30 p.m. A young couple standing outside said they had help for the night. Firefighters were seen from the Bureau of Reclamation, Grand Coulee, Coulee Dam and Electric City. - Scott Hunter photo